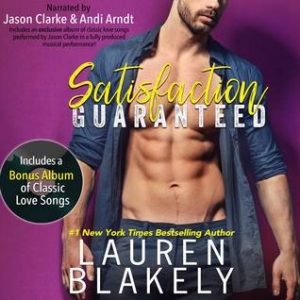 Salone and Malone’s (yeah ain’t that cute) HEA started 7 years ago. They had a magical week together, but once Malone started work at a vet clinic and realized his boss/future business partner was the dad to Salone, he knew they had to stop seeing each other. Malone doesn’t believe in mixing business with pleasure.

Satisfaction Guaranteed puts Salone back in Malone’s life full-time. They had seen each other briefly over the 7 years since they share friends and the fact she is his business partner’s daughter.

Malone is not only a sexy vet who cares about the fur babies, he can also sing like a pro. He is big into the classics like Frank Sinatra, and because of his sister, Truly, owning a night club he sings monthly. Not for fame but for his love of old tunes.

Salone works with animals as well. She helps animals find their fur-ever homes. Since she can work anywhere, her dad thought it would be a great idea of she ran her foster business within the vet clinic, putting her and Malone face to face on a daily base.

Seven years has not stopped their attraction. Malone has never gotten over Salone and he finds out she feels the same about him. They make a deal to spend one week with each other “to get it out of their system.” They fall back in love with each other.

Satisfaction Guaranteed is a funny, sexy and sweet romance about a couple finally getting their HEA. While it’s part of a new series it has ties to Lauren Blakely’s Big Rock World.

The narration was spot on with the team of Andi Ardnt as Salone, Jason Clarke as Malone and special appearances by Amanda Ronconi as Piper via text messages and Shane East as Jason. Since Satisfaction Guaranteed is told more through Malone’s POV we get more of Jason Clarke and he does an amazing job with the singing parts.

Look, she started it first.

She issued me a challenge I couldn’t back down from. Make her purr like no man has done before.

Fine, she’s my business partner’s daughter. All right, I’m also working in the same damn practice with her. Yes, she happens to be my ex-fling. But that was seven years ago, and it was barely a week-long thing.

Except, Sloane is still the one I can’t stop thinking of – brilliant, sexy, captivating Sloane. Maybe a week of taking her to new heights will get her out of my head.

So what if we spend a few nights on the town too? So what if I romance her across Manhattan? It’s all in the name of scientific pursuit of more magnificent Os.

Until the rules change…