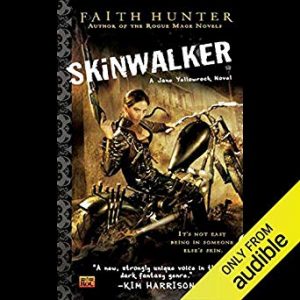 Jane Yellowrock is a vampire hunter; a very good vampire hunter. She’s been hired by the vampire council of New Orleans to find and exterminate the rogue vampire plaguing the city. While the civilized vampires may realize she’s not human, they don’t know she’s a Cherokee skinwalker, a secret only a handful know, and something Jane has little understanding. But what makes Jane the best in her profession is Beast, the wildcat soul that lives within Jane.

I’ve FINALLY started the Jane Yellowrock series, something that has been on my TBR for years! Overall I enjoyed my first foray into Jane’s world. The author creates a fascinating world, giving readers/listeners some important clues to Jane’s past and true form, but leaving so much wide open. The plot of Skinwalker is exciting; however, it is Jane’s story that is utterly engrossing, and I wanted to jump into the second book as soon as I was done with the first. I love how Ms. Hunter gives just enough about Jane to satisfy my need for information and doesn’t leave everything mysterious and ambiguous.

I like Jane. It took a little bit for me to warm up to her, but in the end, I liked her no-nonsense attitude. I like how she pushes boundaries, but can be respectful. I am not as fond of Beast; she is a bit scary, but I think I’ll end up liking her. Beast is a separate character, and I appreciate how the author gives Beast her own speech patterns and way of thinking. It’s written (and therefore narrated) as different from Jane. I like that Jane is remorseful over what happened to Beast. I like that Beast recognizes together, Beast and Jane are better and stronger than as separate components. But Beast has her own moral compass, and while it’s not warped, it is that of a creature and different from that of Jane, the person.

Skinwalker’s story is a standalone mystery of who/what is the rogue and how to capture and end it. The author uses this plot to introduce readers to a large cast of characters and build Jane’s world. Since Jane is new to New Orleans, the reader learns along side of her. It’s a very effective method of world building. The entertaining and action-packed story is solid on its own, but the world is fascinating. It will be interesting to see how the vast array of characters plays out over the next few books. Some I like more than others. I didn’t like the Joe, but after a big reveal, maybe I’ll like him more? Leo…. he’s going to be her nemesis for a while. Bruiser… maybe? The Cherokee? So undecided on them all. But they are all very interesting.

Narration: The narration is performed by Khristine Hvam, my first time listening to her work. I like Jane’s voice a lot. Ms. Hvam gets into her character and exudes Jane’s attitude. She also does a great job changing it up for Beast. I feel her Cajun accents are a bit overplayed, and male voices aren’t very masculine. For example, Rick (the Joe) is supposed to be a player: smooth and masculine. But the voice the narrator uses sounds goofy and feminine. Additionally, I had trouble distinguishing several of her male characters.

In the end, I enjoyed Skinwalker and the start to the Jane Yellowrock series. The story has lots of action, unique and interesting characters, and leaves the door open for conflict and adventure ahead. I look forward to more.

Jane Yellowrock is the last of her kind—a skinwalker of Cherokee descent who can turn into any creature she desires and hunts vampires for a living. But now she’s been hired by Katherine Fontaneau, one of the oldest vampires in New Orleans and the madam of Katie’s Ladies, to hunt a powerful rogue vampire who’s killing other vamps…