Note: The narration for both titles is reviewed at the end of the story reviews. 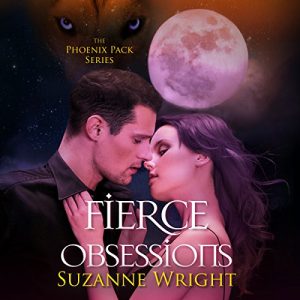 Fierce Obessions opens up with Rily and Tao waking up in bed together. Seems a night full of drinking helped them over-come their animosity. There’s been an attraction from the beginning, but they both have been fighting the attraction. Riley thinks their night together will be a one night stand they will forget happened. Tao has other plans.

Tao is one of the enforcers for the Phoenix Pack. He’s quiet and brooding.

He doesn’t take well to change or strangers. He’s had his eye on Riley the raven shifter ever since she came to the pack as the protector of two young shifter children. Tao doesn’t trust her because she’s an outsider and a raven. Raven’s are seen as untrust-worthy in the shifter world.

Fierce Obessions has two elements of danger. One focusing around Riley and her group of Ravens. She left her “pack” a few years back after a mass murder happened. She goes back to see her uncles who raised her after her parents died (not in the shooting). Some of her pack members blame her for the shooting or at the very least being the only one to survive it. The other element of danger is a human criminal is endangering the Phoenix Pack because he wants their female alpha, who is also a very powerful healer to heal his brother.

Seeing Tao and Riley grow closer and fall in love as thrilling, sexy and touching. They both are strong people who never believed they would find love much less their true mate. Which makes me wonder, in the world Suzanne Wright has built, when shifters with different animals mate and have kids, what animal will the kids have? It will be interesting to see if Tao and Riley have a kid in future books since we continue to see all the characters in some capacity. 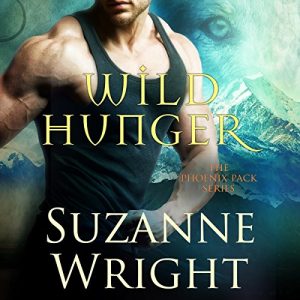 Wild Hunger continues the story of the Phoenix Pack with another couple finding out they are mates. This time the heroine is half-wolf shifter and half-human. Her mom was human and mated with a wolf shifter. After their deaths, a three-year-old Frankie was taken from her pack home to live with her human grandparents. Frankie didn’t know the truth surrounding the deaths of her parents until her wolfie aunt contacted her because her grandmother was on her death bed.

Frankie finds out her human family lied to her about her shifter family and wants to reconnect with them to learn more about her wolf side. She agrees to meet her aunt and that’s when she sees Trick. Once Trick sees Frankie he knows she is his mate. He does his best to take things slow with Frankie so as not to scare her off.

One of the big differences between Frankie and Trick and other couples in the series, is they don’t really fight the mating bond. They both come to grips with the fact they are mates pretty fast. Since there’s not much conflict in that department there are other things to work through. Like Frankie’s recurring nightmares from the night her parents were killed. Then there’s tension between the Phoenix Pack and another pack.

While Wild Hunger was enjoyable enough, it didn’t leave me with a hunger to jump into the next novel, making me want to take a break from the Phoenix Pack series. Mostly, because the couples are being to feel a bit like rinse and repeat and there’s not been much movement with the overall series plot between the shifters and the human extremist.

Fierce Obessions:
When raven shifter Riley Porter was given sanctuary by the Phoenix Pack, she let them believe she had left her flock. Reluctant to divulge the secrets of her past, she was still embraced as family. Only Tao Lukas, the protective and passionate Head Enforcer of the pack, was resistant to the enigmatic shifter. Until Riley started to arouse in him something other than suspicion…

Tao doesn’t trust lone shifters, especially ones so guarded – and tempting. But the sexual tension between them is making them both come undone, and vulnerable to more than desire. All Tao wants is for Riley to stay with him and to trust him with the truth of her past…

As Riley’s mysteries come to light, so does a danger that threatens not only her life but the safety of the entire pack. For Tao, keeping Riley safe means keeping her close – forever – as his mate!

When half–wolf shifter Frankie Newman receives an e-mail from a family member she didn’t know existed, a secret is revealed: as a child, Frankie witnessed her father killing her mother…and then himself. Frankie was torn from her pack by her mother’s human relatives, and the trauma was erased from her memory. Realizing that she’s been lied to her entire life, she’s never felt more alone. Until she catches the scent of an old friend—warmly familiar and intoxicating.

Trick Hardy, enforcer of the Phoenix Pack, can sense the rush of mutual attraction when he sees Frankie again. He knows immediately that she’s his true mate. But he also knows that, given her fragile state, he needs to tread with care—no matter how fierce his surging desires.

As aroused as Frankie is by Trick’s darkly dominant air and simmering desire, her priority right now is her past—not her future, no matter how tempting. But as more secrets emerge and Frankie’s life is threatened, Trick must do everything he can to keep her close and safe. After all, it’s their destiny.