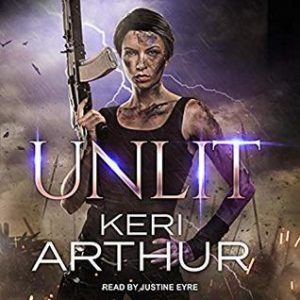 Unlit is the first book in Keri Arthur’s new Kingdoms of Earth & Air fantasy series. We are introduced to Neve, a stained, unlit solder on the Nightwatch. The Winterborne society is split between those who have magic, either earth or air, and the “unlit,” those without magic, lesser. Additionally, there is a greater burden on those who are “stained” meaning they have Ercholin blood in their lineage. We discover up front that centuries ago, the humans fought off the insect-like Ercholins, but at great cost to the land, making most of it barren desert. Additionally, the residents of Winterborne and its outposts fight off attacks by the Addlin, powerful creatures that hunt in packs.

Overall, I really enjoyed Unlit and the world of earth and air magic. One of my favorite aspects is how the magic works: when those with ability pass on, their soul/spirit joins a collective and assists those still living. For example, Neve, who hides her ability to hear the wind, learns how to use the knowledge of the wind to help inform her, as well as its power to both save and destroy.

As the storyline progresses, Neve befriends Trey Stone, an earth witch who gave up his position as the first born of an influential house to command one of the outposts. Through him, Neve discovers that there are powerful stained witches, and that she herself may be one. They bond over circumstance and connect through undercover work. While I wouldn’t necessarily classify the book as a romance, the romantic element of their relationship is a strong part of Neve’s story. Through Trey, Neve becomes a stronger woman and a formidable weapon to their enemies. The politics and subterfuge add interesting layers to the story.

Narration: This is my first time listening to Justine Eyre perform. She has a distinct voice that is soft yet gruff and grizzled around the edges. At times it sounded as if her voice was breaking up… both emotional and cracking. With the story shared from the first person POV of Neve, I found the narrator’s rough edge very suitable for Neve’s hard life. Ms. Eyre’s males are noticeably deeper and masculine. However, she does not provide much distinction between characters of the same gender. I really like her voice for the wind, which always felt urgent.

In the end, I enjoyed Unlit and look forward to finding out what becomes of Neve, Trey, and the Winterborne society.

Though classified as having no magic, Neve March can hear the whispers of the wind and sometimes even control her. But it’s a secret she must hold close if she wishes to continue as Nightwatch—the soldiers who guard Winterborne against those who roam the wastelands and feast on human flesh.

When Neve is sent to investigate a faint SOS signal, she not only unearths a woman close to death, but a plot involving an ancient enemy long thought dead.

In an effort to expose those behind the plot, Neve goes undercover amongst Winterborne’s elite—a dangerous step that could expose her secret and rip away all that she holds dear.

The trail of treachery leads her from Winterborne’s golden halls to the heart of the enemy’s hive, and it will shake her belief of not only who she is, but what she is.