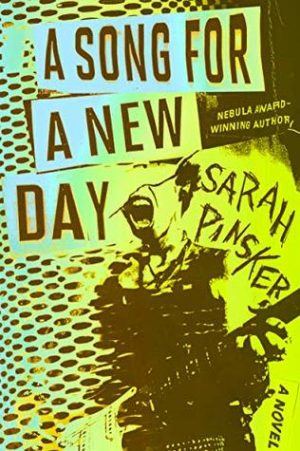 Song For A New Day
Author: Sarah Pinsker
Reviewer: B.
Rating: B+

I don’t get to read many new-to-me authors these days, but I really enjoyed Song for a New Day, by Sarah Pinsker. The cover alone was enough for me to say, “Yes, please!” Though it easily fits under the “Dystopian” umbrella, I was mostly taken with the author’s treatment of the passage of time and the necessity of creativity (specifically, the performance of music and the relationships formed between artist and audience) as it’s shared via human interaction. And, while it took me several chapters to stop overthinking the merging timelines, I wound up completely engaged by the halfway point in the narrative.

Song for a New Day is set in the present-day/very near future United States and follows our main characters, Luce Cannon (one of my favorite pseudonyms for a character to date), and Rosemary Laws. Here, the world is divided into two aspects: the Before, and the After. In the Before, we meet Luce, a touring musician on the verge of making it big. Told in the first person, life for Luce functions much as it would now—traveling with her bandmates, working hard to make a name for herself, and looking forward to whatever might be coming next. I found Luce to be the more interesting character, and it was through her that I became attached to the narrative as a whole.

In the flip side, or the After (presented in the third person), we’re introduced to Rosemary, who works as a VR tech help desk operator for Superwally, a megacorporation that sells anything and everything that could possibly be needed or wanted, and delivers those items to a customer’s doorstep within hours. So people never have to leave their homes. Sound familiar? Having little memory of the Before, Rosemary is almost fully indoctrinated, conditioned to accept the commodification of her identity and fear human contact. I had more trouble understanding and sympathizing with her, even though I liked where she seemed to be heading by the end.

Initially, there are several facets of this story that will seem familiar to many: societal upheaval, state-proliferated fear backed by parasitic corporate greed, reality displaced by VR gear and pervasive marketing, etc. But, it is as Luce and Rosemary’s respective timelines converge in the After, that Song for a New Day really begins to take on a unique shape. Terrorist attacks and a population-diminishing virus have driven nearly everyone into government-mandated/self-imposed isolation. From this point, the two POV’s connect and then separate before meeting again, one never coming completely untethered from the other, regardless of the debris field between them.

It’s difficult to whittle everything in Song for a New Day down to a single truth. Luce gives a solid rant outside the gates of Graceland that essentially does as much, but there are as many possibilities as there are audience members—which is really a good thing. It’s likely to vary by user experience. We, not big companies or the government, ought to be actively shaping our future. The author’s treatment of experience was more hauntingly subtle, suggesting that the acquisition of knowledge only runs one way: for better or worse, we can’t un-know that which we’ve sought to learn. Regardless, Song for a New Day was a nice surprise, and I’m looking forward to other titles by this author in the future.

In the Before, when the government didn’t prohibit large public gatherings, Luce Cannon was on top of the world. One of her songs had just taken off and she was on her way to becoming a star. Now, in the After, terror attacks and deadly viruses have led the government to ban concerts, and Luce’s connection to the world–her music, her purpose–is closed off forever. She does what she has to do: she performs in illegal concerts to a small but passionate community, always evading the law.

Rosemary Laws barely remembers the Before times. She spends her days in Hoodspace, helping customers order all of their goods online for drone delivery–no physical contact with humans needed. By lucky chance, she finds a new job and a new calling: discover amazing musicians and bring their concerts to everyone via virtual reality. The only catch is that she’ll have to do something she’s never done before and go out in public. Find the illegal concerts and bring musicians into the limelight they deserve. But when she sees how the world could actually be, that won’t be enough.