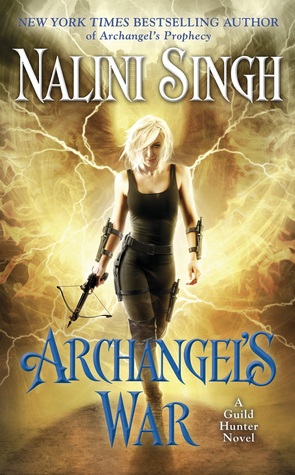 Archangel’s War is the culmination of the entire eleven Guild Hunter books that preceded this one. Lines have been drawn and war is looming. From the climatic battles to the appearance of practically every character ever mentioned in the series, so much about it feels like the final book in the series, but rest assured, Ms. Singh has already announced there will me more. The book opens with so much uncertainty due to the Cascade and the “other” of Lijuan. And of course… readers were left unsure of what would become of Elena after the conclusion of Archangel’s Prophecy. Here is my *mostly* spoiler-free thoughts on this HUGE book. Of course, if you don’t want to know anything that happens, please do not proceed.

Here we go… Elena survives, but she is something other. Ms. Singh finds a way to fulfill Cassandra’s prophesy by changing Elena, but keeping the core of her intact. Much of the first third of the book is dedicated to detailing what is happening to Raphael and Elena; how they are changing; what happened while they were asleep. It is interesting and necessary, but loosely tied to the overall plot. Raphael and Elena’s relationship continues to evolve and grow; their love even stronger for all they’ve been through. One negative for me was the amount of repetition. Just little phrases, reminding readers… how much there is no life without the other, how he’s fighting the coldness of his new power. It all went on a bit too long for me, and I needed the story to move forward.

The middle third of the book focuses more on the coming threat, rising Ancients, and Cascade-driven problems around the world. There is a lot happening! I like that we check in with most of the players and discover what has been happening/what is going on. It’s definitely not a “the series is ending so let’s wrap stuff up” situation, but a solid way to let readers know how the Cascade is impacting all sorts of folks, from humans to vampires, angels, hunters, etc. I continue to be awed by Ms. Singh’s world building and ability to expand upon the amazing world she’s already created without expanding so much it gets out of hand.

The last third of the book is dedicated to the War of Archangel’s War. There are many skirmishes and fights that lead up to the climatic battle. I have to be totally honest here – I lost interest in the story at this point. I feel bad just saying that, but the scenes just went on and on – at least a hundred pages or more, and frankly, nothing progressed. I think it was a bit too “realistic” in that way. I needed the story to progress much faster than it did. However, once the final battle began, I was captivated; it was what I’d been waiting for since the Cascade first began. There are casualties and triumphs, there are shifts in world power and politics. And in the end, there is change and dare I say, hope. I really, really loved the way the story played out and cannot wait to see what Ms. Singh tosses at Raphael and Elena in the future!

The world is in chaos as the power surge of the Cascade rises to a devastating crescendo. In furiously resisting its attempts to turn Elena into a vessel for Raphael’s power, Elena and her archangel are irrevocably changed. . .far beyond the prophecy of a cursed Ancient.

At the same time, violent and eerie events around the world threaten to wipe out entire populations. And in the Archangel Lijuan’s former territory, an unnatural fog weaves through the land, leaving only a bone-chilling silence in its wake. Soon it becomes clear that even the archangels are not immune to this deadly evil. This time, even the combined power of the Cadre may not be enough. . .

This war could end them all.