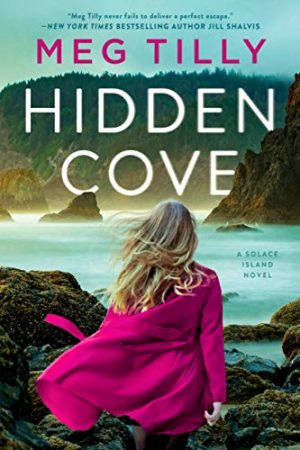 Author Meg Tilly returns to her Solace Island Trilogy with the final book, Hidden Cove. Tilly includes that dark drama she’s drawn to write as the main focus of the story.  Someone is killing art curators and Zelia Thompson is next in line, but she doesn’t know it.  There is a love story here, but it isn’t the focus of the book.  Rather, it’s a support system to drive the investigation of what happened to Zelia ’s friend Alexus Feinstein after police have ruled her death a suicide.  Will Conaghan, Zelia’s love interest, is conveniently a famous crime novelist with lots of contacts in law enforcement and has studied the methods of criminals to make his books authentic. That comes in very handy when you’re investigating a crime that the police don’t believe is a crime.

Will’s parents are peripheral characters which are a little too single-minded.  It makes them more one dimensional than they deserve to be. There is one other character introduced, Mary, Zeila’s undocumented assistant.  She’s present to drive the antagonist’s plotline, not to a be a full-fledged part of the story.  Unfortunately, she becomes one anyway and we’re left wanting when her storyline is left unresolved. That’s What I’m Talking About checked with the publisher and this is definitely the end of the trilogy.  To me, however, it doesn’t feel like a series end.  Mary’s flight from the story is a significant loose end which could be another book or possibly the start of a new series in a new location.

The first two books focused on the Harris sisters, but the only connections Hidden Cove has to them is loose.  Besides the location of Solace Island, Zelia is the owner and curator of a prominent art gallery.  She becomes enamored with Eve Harris’ work while in the Intrepid Cafe and wants to represent her.  That’s it.  That connection is so superficial that it feels more like a stand alone book rather than an integrated part of a series.  I would love to see the series continue and possibly bring these disparate characters together in a more personal way or allow this be the bridge to a new series focusing on that big loose end. 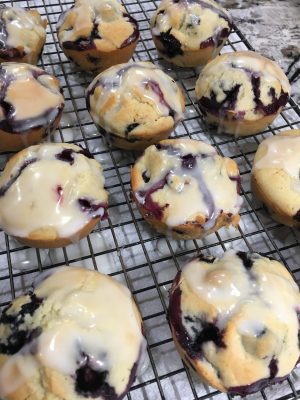 Tilly’s writing has definitely improved.  It’s more cohesive than the last book.  There are some really beautiful descriptions, but the flow of the action still begs to be seen rather than imagined.  Tilly should really try her hand at screenplays.

So even though the connection to the Intrepid Cafe is casual at best, Tilly does include another recipe in the back of the book, this time for lemon glazed blueberry muffins. Depending on the size and quantity of the blueberries you use, it makes roughly a dozen.  It’s a pretty average recipe, but if you like baking from scratch, having a small batch recipe like this is a good one to keep on hand.  They are tasty.  Like the last book, a good sugar fix rolls over feelings of annoyance about non-fatal flaws. Get the book.  Bake the muffins. Read the book. In that order.

When Solace Island gallery owner Zelia Thompson’s close friend Alexus Feinstein of the prestigious art gallery Feinstein & Co. dies of a “drug overdose,” Zelia’s intuition sounds an alarm. The Alexus she knew didn’t do drugs and had everything to live for.

As Zelia begins looking into the circumstances of her friend’s death, what she uncovers will put her life in imminent danger. Will Zelia–with the help of the reclusive crime fiction novelist Gabe Conaghan–be able to unravel the mysterious happenings surrounding Alexus’s untimely death? Or will she become the bloodthirsty artist’s next victim? 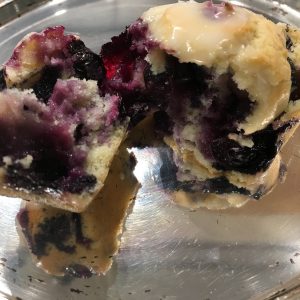