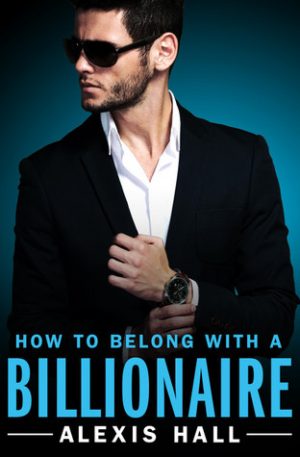 How To Belong With A Billionaire
Author: Alexis Hall
Reviewer: B.
Rating: A

I believe starting this review of How to Belong with a Billionaire with a trigger warning needs to be done for two reasons:

1) there is an unsuccessful attempted rape towards the end of the narrative, and
2) so much of the story concerns sexual abuse and the uniquely personal, imperfect, and continual journey that surviving it can be.

Reading How to Belong with a Billionaire was difficult sometimes, but I loved it. The first two chapters are mostly an update of Arden’s status (i.e. he’s “coping”), even though they still induced a renewed ache for all that’s happened between he and Caspian thus far. By the third, however, I’d torn into a new box of tissues because the story slipped past my defenses that much—despite believing I’d inoculated myself with the preview chapters at the end of How to Blow It with a Billionaire. It didn’t help in the slightest, and I wouldn’t change it for the world.

The three novels in the Arden St. Ives series follow a profound evolution of the characters on its pages. As such, I strongly recommend reading each in order before beginning How to Belong with a Billionaire. Even their respective prologs are extremely important, and give essential information and perspective regarding the men who narrate them (whether they are about the most selfish of saviors, a vengeful nightmare-puppeteer, or a fallen angel, adrift of purpose) and how they see themselves relating to Caspian. The third of these is easily my favorite, its source having endeared himself to me almost from his very first appearance, but particularly, and evermore, here.

Something that didn’t surprise me within the context of Arden’s experiences—but likely would have put me off the narrative entirely in any other case—was my reaction to Arden learning about himself sexually with someone besides Caspian. Sex was an easy, joyous thing for Arden when we first met him, and I was  glad that he was able to explore, particularly his desire via submission, in a framework apart from heartache.

As has been the case with the previous stories, the additional characters in How to Belong with a Billionaire were, with rare exception, absolutely perfect. Ellery, naturally, owned every scene she was in, and I adore her more than ever. I’d actually love nothing better than to own a snuggly black sleepshirt that says—in some monarchical, sanguinary font—“I’m a Death Princess of Darkness.” George is also here, and I’m sure there’d be a “Saint George” joke to be made, if only she didn’t deserve the title so completely. Bellrose, too, has carved out a space for himself in my heart at this point, right next to Nick’s (who is present, as well) and he’s very welcome to it.

How to Belong with a Billionaire is not an easy read. It is filled with hurts, tragic missteps, and some genuinely messy stuff—though nearly all of it felt necessary to me. There were places where I was absolutely furious with Arden and Caspian both. The mistakes made here are not youthful errors, but adult wrongs with collateral damage. And, while sexual abuse is never an excuse to do harm, surviving it is a precarious and costly thing.

Although it does have darker overtones, How to Belong with a Billionaire is filled with beauty and promise which stayed with me long after I’d finished the story. Arden and Caspian know each other now, as they couldn’t before, making the love they’re fighting for feel like the forever I so wanted them to have. In many ways, Caspian has been trying to save everyone around him since the beginning, even if from himself. I very much enjoyed the fact that, this time, Arden was able to rescue him right back.

If you love someone, set them free…

I thought I’d be okay when Caspian Hart left. He was a brilliant, beautiful billionaire with a past he couldn’t escape. And I was … just me: an ordinary man lost in his own life. It would never have lasted. It should never have happened. Not outside a fairytale.

And I am okay. I’ve got my job, my family, my friends, and everything Caspian taught me. Except it turns out he’s going to marry his ex-boyfriend. A man who doesn’t understand him. A man who almost broke him. And I’ve finally realized it’s not enough for me to be happy. I need Caspian to be happy too.

Problem is, I’ve already done all I can to help him. I’ve followed his rules and broken his rules and learned his secrets. And he still won’t believe I can love him. So now it’s his turn. His turn to fight, and trust, and hope. It’s time for Caspian Hart to choose me.