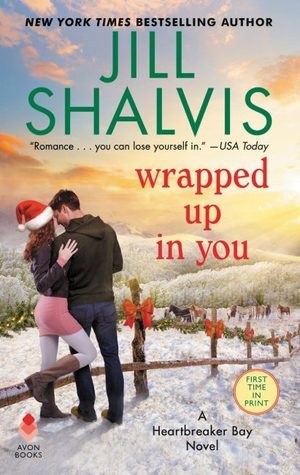 Ivy has been living in San Francisco for about a year, finally staying in one place and setting down roots. She’s made friends and opened a successful taco truck, but her life is still very solitary and lonely. Kel, a sheriff from Sunshine, Idaho, is visiting his cousin Caleb while on mandatory leave from work. He has serious trust issues but finds himself opening up to Ivy, even though he knows his stay is only temporary.

Wrapped Up in You, the eighth full-length title in Ms. Shalvis’s enjoyable Heartbreaker Bay series, gives readers more of the same happily-ever-after romance that she’s so good at writing. Kel and Ivy are two lonely souls who come together due to an undeniable attraction, then find solace and love.

Jennifer: Kel and Ivy has some crazy chemistry. I liked how they took it slow even if they did get together with a week and a half of Kel being in town. Kel knows Ivy isn’t a “love her and leave her gal.” He takes his time with her in order not to hurt her, and she is willing to give Kel a chance even though she knows he is not staying in town. She is in a place where she wants a relationship, but decides to enjoy her time with Kel no matter how short it may be.

Jen: I agree, even though in “real time” it happened fast, it was still a slow and steady romance. Kel has been hurt by women in his life – his mom and ex-partner being two significant examples. He has serious trust issues and will not forgive lies. And Ivy tells lots of lies about her past, covering up her shame and embarrassment over her family. I was concerned this would be a major conflict between the pair, yet Ms. Shalvis allows some flexibility in Kel and openness in Ivy, giving the pair a chance to get to know one another. I appreciate how Kel recognized right away Ivy’s defensive behaviors, and instead of walking away, pushed her to open up and explain.

Jennifer: These two have issues due to their families, and I think that is what lends to their willing to bend for each other. They know sometimes people make bad choices in the name of love for their family.

Jen: Very true. However, I also was a bit frustrated and bored at times with Wrapped Up in You. Ivy is another tough heroine with a rough past. Some may even say “broken”. This is a common thread in this series, and frankly, one story seems to be blending into the next. Additionally, when the series first came out, I loved all of the characters. They were tangible and interesting; however, now all of the characters are blending together. I no longer remember who is who. and the characters I adored are losing their uniqueness.

Jennifer: I agree, while the heroines of these novels are well written, they seem to be more of the same. Which makes it hard pressed for me to keep them from morphing into one person.

Jen: Regardless of my issues, the story did hit me in the heart. Ms. Shalvis can write wonderfully emotional scenes that work for me, even if I’m not super invested in the couple. She excels at HEAs, and Wrapped Up in You is more of that. It’s just getting harder and harder to stay interested in the titles when they don’t stand out from one another.

Jennifer: While I had the same issues, I enjoyed Wrapped Up in You as well. Shalvis is a feel good author to read. I wish she would take a chance and give us something totally different from what I’ve read. Her writing is great but a little on the “safe” side. Many of her novels, even in other series, have the same feel.

Jen: B- Liked It, but I had a few small issues

Jennifer: C+ Liked It, but I had issues

After a lifetime on the move, Ivy Snow is an expert in all things temporary—schools, friends, and way too many Mr. Wrongs. Now that she owns a successful taco truck in San Francisco and an apartment to call home, Ivy’s reinvented life is on solid ground. And she’s guarded against anything that can rock it. Like the realities of a past she’s worked hard to cover up. And especially Kel O’Donnell. Too hot not to set off alarms, he screams temporary. If only his whispers weren’t so delightfully naughty and irresistible.

Kel, an Idaho sheriff and ranch owner, is on vacay, but Ivy’s a spicy reason to give his short-terms plans a second thought. Best of all, she’s a tonic for his untrusting heart, burned once and still in repair. But when Ivy’s past intrudes on a perfect romance, Kel fears that everything she’s told him has been a perfect lie. Now, if only Ivy’s willing to share, Kel will fight for a true love story.