Why I write, and why I’m tackling a fantasy super series.

Hi there, my name is Kristy Nicolle, and I’m a fantasy author living in the historically beautiful city of Norwich, England. I’m 26 years old and have been publishing for the last 3 and a half years. I currently have 10 published works and I’m here today to talk to you about my main project, The Kristy Nicolle Infiniverse. I want to say a big Thank You to Jen for hosting me today, and am going to begin this post with a simple story that explains why and how I came to writing, before talking with you about my current WIP and why it’s exciting for readers.

If you’d have told me four years ago that’s I’d currently be sitting on a total of one and a half million published words, I’d have laughed you right out of the door and into some poor bewildered bordering nation. It seemed ridiculous in both notion and execution at the time, and sometimes I wake up still unable to believe that this is what I do for a living. At the age of 22, I was ready to spread my wings and begin to Academic career I had been working on for the majority of my adolescence and young adult existence. I was beginning an MA in 21st Century Literature at The University of Lincoln and was also beginning to look into ways of funding further study for my doctorate. That summer, before I began my studies, I hadn’t been well. Suffering with severe back pain, neck ache, headaches, joint pain, and fatigue, so decided to get myself seen by a doctor to make sure I was fighting fit by the time term began. Long story short, I was diagnosed (Wrongly, though I didn’t know this at the time- it was not until two years later that I was correctly diagnosed with Ehlers Danlos Syndrome) with Fibromyalgia. You’ve probably heard of this before, or know someone who has it, but if you haven’t then in short, it’s a chronic pain condition that causes nerve and joint pain for no medical reason that is currently known. It is also uncurable at this time.

I was devastated, lacking the energy to complete my studies, make it to classes, or work tightly to the required deadlines, I was navigating a life that had suddenly been turned completely upside down and wasn’t my own.

So, I quit. And it was around that time my partner Mark found a long-lost secret of mine hidden in a desk drawer while I was taking a shower. That long-lost secret turned into my first published novel, The Kiss That Killed Me, and started me along this insane author journey I never saw coming.

If it weren’t for writing, I honestly believe that I would have let my chronic pain and the depression that comes with it beat me. When I was having a bad day, or a flare, I wanted nothing more than to step into the worlds I was building, to have a chat with my favourite character or a nefarious adventure with an anti-hero. And when I was put through medical test after medical test and new diagnosis after new diagnosis, the one thing I could do to escape was sit down at my laptop and type. After doing this for almost four years, I have found that I can achieve freedom from my pain, as well as giving that same opportunity for freedom to my readers, through fantasy. Hence why my author tagline has always been= Finding Freedom Through Fantasy.

Anyway, that’s enough about me. I want to talk to you now about my current work in progress, and what will probably consume the rest of my writing days due to the immense size of complexity of the project.

So, let’s talk about The Kristy Nicolle Fantasy Infiniverse.

The Kristy Nicolle Fantasy Infiniverse… Why a 70 book series? 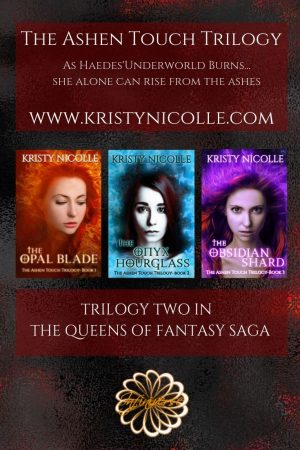 When I explain to readers either online or in person at Book Signing Events that I plan on writing a seventy plus book series which occurs in one world, I often get met with looks of astonishment, and sometimes even disbelief as if what I’m attempting isn’t possible.

However, I think that with the state of publishing as it is today means that we are not only entering a whole new way of producing and distributing books, but also a period of evolution with regard to how we both create and conceive stories in general.

Netflix is a great example of this, whereby viewers are now consuming enormous amounts of content in one sitting. Binge culture is certainly growing, and more than that, now viewers have actually been responsible for the resurrection of popular shows such as Lucifer which was dropped by its original network, showing that both social, and regular media channels at large are putting the power in the hands of the fans and not just the producers.

So why is this super exciting for you?

How is the Kristy Nicolle Fantasy Infiniverse shaping up, and why should you be excited?

You should be excited because I have BIG plans for this series and the first saga is just the beginning. Saga One- Queens of Fantasy- consists of three trilogies, which lead on to a tenth book and final book where the worlds and characters of the three trilogies collide. You’ll find your favourite characters from SEPARATE series clashing, knocking boots, and hitting the town in ways you have never imagined as they discover not only each other, but the worlds they each inhabit, for themselves.

I also have three series planned which cover Vampires, Werewolves, and Witches which link back to the original Queens of Fantasy Saga Lore, a follow up 10 book saga called Queens of Darkness which occurs 15 years after Saga One, and a prequel Saga of another ten books called Queens of Ancient. 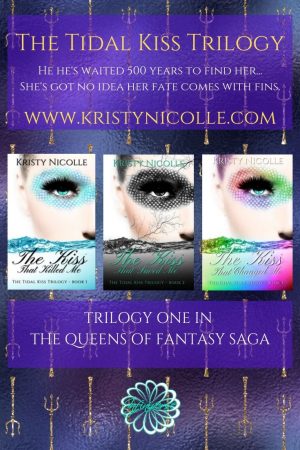 There are also spin off series and stand-alone novels planned to explain and explore the pasts of the most intriguing characters, as well as multiple origin stories for some of reader’s favourite couples. It is also entirely possible, that after all this is said and done, these characters, stories, and worlds will culminate in one epic series including all the characters that have been introduced so far. As I said, with a series this size and this genre, literally ANYTHING is possible!

So… there you have it.

Want to check out Saga One so far?

DISCOVER SAGA ONE- QUEENS OF FANTASY