This past weekend, I was super fortunate to attend the first ever KissCon in New England! Sponsored by Avon Publishing and independent book seller, Bank Square Books, KissCon was held on Saturday October 24th at the Mohegan Sun Resort and Casino, located just south of Norwich, CT. 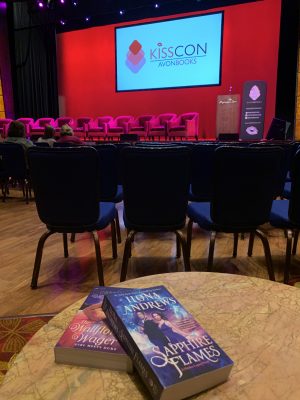 The event featured authors (from left to right): Gordon & Ilona Andrews, Loretta Chase, Tessa Dare, Megan Frampton, Caroline Linden, Sarah MacLean, Nisha Sharma, Joanna Shupe, and Olivia Waite. The two hour public event was only $10 and included a paperback from one of the authors, selected by the attendee prior to the event. The authors each spoke a bit about themselves and their newest Avon title. Then there were some hilarious speed round questions (ask Nisha why the correct answer should always be “wheel of pleasure”) and a few rounds of “Never Have I Ever.” The Avon team did a fantastic job keeping things moving and entertaining. The last 45 minutes or so was dedicated to a book signing for those in attendance. I waited in line for Tessa Dare (getting a book for a good friend), and then Ilona Andrews.

The whole reason I went to the event was so I could FINALLY meet my favorite authors, Ilona and Gordon Andrews. I waited to have my book signed (I didn’t bring any from home), and got a quick photo with the couple.

An hour later, there was a separate VIP event for those lucky enough to get the tickets before they sold out (I was one!). Each attendee received a complimentary drink, light appetizers, and a selection of desserts. There was also a gift bag filled with three ARCs and some fun swag. I spent the first half hour in a small group chatting with RITA winner Nisha Sharma. We discussed her books, as well as favorites we all were reading. We talked about what was happening with each of us. I really enjoyed my time, and plan to pick up The Takeover Effect, the first book in her Singh Family series.

Then I headed over to the larger gathering seated (and standing) around Ilona and Gordon. When I joined the group, they were discussing the Hidden Legacy series. They mentioned that we will see more of Victoria, refused to answer if Linus is a mentor or bad guy, and we’ll be meeting Arabella’s future HEA in the next book. I also asked about Hugh’s next book – which will hopefully come out in the spring, and will be set back in time (pre-Magic Triumphs). We are going to learn how Elara became the White Lady. I did tell them how much I LOVE the Innkeeper Chronicles, and we also discussed the narration of their books.

Both Ilona and Gordon are as lovely in person as they are online. I only wish we could have chatted longer, talking about non-book things as well. But our time was up (the event was one hour), and as I headed out, Ilona stood and gave me a hug. I had such an amazing time thanks to Avon, Bank Square Books, and the attending authors. I hope that KissCon comes to New England again!