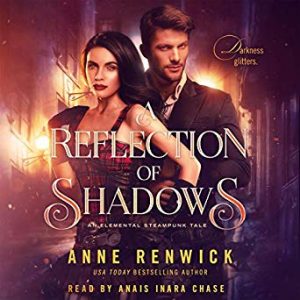 Having read and enjoyed A Reflection of Shadows, I jumped at the chance to listen to and review the audiobook version. I found that I delighted in the story equally as I did the first time around. Ms. Renwick pens a clever steampunk historical London, and the tales are full of exciting adventure. The story explores the idea of humans exhibiting animal-like traits (something that started in the previous title). Colleen, with her golden eyes and increased dexterity, uses her unique features as a thief of goodwill. In her journeys and among her society engagements, she’s befriended the handsome Nick, an agent of the queen.

As an agent of the queen, Nick has seen it all, but when he hears of an experimental device that may save his dying sister’s weak heart, the mission becomes personal. Seizing the opportunity to express his admiration of Colleen, and win her over by making him his partner, Nick proposes as a matter of convenience, but intends to make Colleen his bride. The pair work to discover the truth behind layers of subterfuge and hope to save his sister in the process.

Overall, the story was gripping. I love watching the pair work as truly equal partners. Nick trusts Colleen completely and respects her intellect and decision-making. He knows the way to her heart isn’t through flowers and dances, but secretive roof-top  missions and clandestine rendez-vous. He is her perfect partner and I loved watching him pursue her affection.

Narration: This is the third of the Elemental Web Tales stories narrated by Ms. Anais Inara Chase. A Reflection of Shadows is shared in the alternating POVs of Colleen and Nick. Ms. Chase presents a British accented female narrator for both the male and female parts, with dialogue altered slightly to fit the age, gender, and station of the speaker. The primary two characters’ voices aren’t very distinct from the narrator, but a mild attempt to differentiate is noticeable. Overall, Ms. Chase has a pleasing voice; she adds appropriate pauses and provides loose emotional cues; however, I prefer a bit more of a distinction between characters.

My Ratings:
Story: B+
Narration: B-