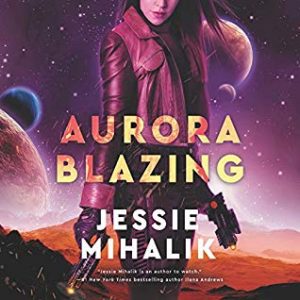 Picking up shortly after the conclusion of the first title in the Consortium Rebellion series, Aurora Blazing gives listeners Bianca von Hasenberg’s story. I already liked Bianca in the first book, but I became immediately intrigued by what we learn in the first chapter. First – we already knew she had a short and unhappy marriage. What we find out is that her deceased husband, a brilliant scientist, experimented on her. Her nanobots and brain can pick up and decode transmissions and signals, something no one else knows. Second – she helps girls and women, secretly saving them from destructive or abusive situations.

She and House von Hasenberg’s director of security, Ian Bishop, have a past. He was her personal body guard, and when they were younger, she “made her interest known” but he brushed her off, and she can’t ever forget the humiliation. When her eldest brother, the von Hasenberg heir Ferdinand, is kidnapped and someone tries to kill her, Bianca decides to break away from her home to save her beloved brother. With Ian on her heels, she must outsmart and outmaneuver him or risk being sent home.

Aurora Blazing is a fantastic adventure from beginning to end! I loved watching Bianca piece together various intel and follow the deeply hidden bread crumbs on the trail to Ferdinand. At times she has to use finesse and others, brut force. She works well on her own, but is her best when she teams up with Ian (and her sister Ada and the gang from the first book). Each trail is filled with danger and excitement, causing me to hold my breath in anticipation or worry. And what I love most is that even though this particular plotline comes to a close by the end of the book, there is still so much left open in the broader story arc. I cannot wait to find out what happens next! The entire Consortium world is fascinating, from the sci-fi tech to the dangerous politics, from the heartfelt romances to the friendships and alliances.

While the story is heavy on the action, there is a slow burn romance developing between Bianca and Ian. At times I wish his POV was also included to provide a more balanced picture of the situation. However, knowing how badly Bianca was hurt by her marriage and to some extent, her father, it was difficult to watch her put herself out there for Ian. I’ll admit I sniffled a few times. Ms. Mihalik creates wonderful chemistry and writes heart-felt emotions into her characters.

Narration: Aurora Blazing is shared via the first person POV of Bianca. Ms. Zeller gives Bianca a strong, feminine voice, with a hint of underlying weariness, the toll of life under the bombardment of signals and messages. She alters every character’s voice for dialogue, with each having a unique sound. She does a great job keeping each character distinct. Ian’s voice is deeper with an air of superiority, due to his confident nature. The narrator does an amazing job infusing emotion and situational non-speech verbal cues into the story; she isn’t just reading the story, she brings the characters to life.

I loved this story and the continuing sage of the Consortium Rebellion. I cannot wait for the next title!

Bianca von Hasenberg did her duty for High House von Hasenberg and ended up trapped in a terrible marriage. When her husband dies unexpectedly and leaves her a happy widow, she vows never to marry again. Instead, she uses her connections to save other young women. Information is power and Bianca has a network that would be the envy of the ’verse—if anyone knew about it.

After an attack, Bianca’s oldest brother, the House von Hasenberg heir, disappears from Earth without a trace. Determined to find him, Bianca leaves against orders. When she refuses to return, her father sends Ian Bishop, the director of House von Hasenberg security, to haul her home like a recalcitrant child.

Bianca leads Ian on a merry chase across the universe, but when their paths finally collide, she persuades him that they would be far more successful at finding her brother if they worked together. She will do anything to save her sibling, even if it means spending time alone on a small ship with the handsome, infuriating man who once broke her heart.

As clues lead them deep into rival House Rockhurst territory, Bianca must decide if she can trust Ian with the one piece of information that could destroy her completely. . .