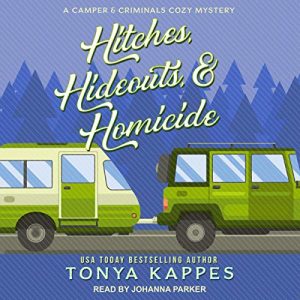 Picking up shortly after previous book, our story beginnings with the opening of a new motel in the old train station. When Mae discovers a dead body the night the big Hoe Down Celebration, she’s determined more than ever to get to the bottom of the murder mystery, despite what Normal Detective, aka boyfriend, Hank Sharp has to say about it.

Hitches, Hideouts, & Homicide is the seventh tale in the Camper and Criminals Cozy Mystery series. After taking a two month break from the series (due to a few frustrations with the series), I was looking forward to getting back to Normal. However, that joy was short-lived as the things that irritated me about the series seemed to grow over the course of listening to this short tale.

The mystery itself was interesting, however Mae’s overzealous determination to uncover the truth at all costs ruined it for me. She was so busy coming up with theories via gossip and tossing around accusations, that I never felt she had a firm grasp on who really did it until she stumbles on to the answer.

Additionally, the characters I once loved are all becoming a bit overly dramatic. Dottie suddenly has secrets and is a standoffish with Mae. Abby is a psycho stalker over Ty. Mae is even more obnoxious, especially to Hank. They all rubbed me the wrong way, which was extremely disappointing. I also felt the ending was abrupt, leaving some of the smaller, personal threads unfinished.

Narration: I’ve come to love Ms. Parker’s southern drawl and how it adds ambiance to these stories. The series is shared from Mae’s first person narrative, and Ms. Parker’s voice fits Mae’s personality: friendly, courageous, and determined. Overall, Ms. Parker fits the southern, small-town feel and pacing of the narrative. Each character has a slightly different voice fitting his/her age and gender, with her male and older women characters having deeper voices. Her narration is the highlight of the stories.

I have to wonder why anyone would visit Normal when there has been at least a dozen murders in a couple years. I like Mae and the residents; however, I’ve become frustrated with inconsistencies in the world-building and the overly dramatic and stupid behavior from one or more characters. Unfortunately, I think it’s time to say farewell to Mae, Hank, the Happy Trails Campground, and Normal, KY.

My Ratings:
Story: C-
Narration: A

Everyone in Normal is excited for the Hoe Down to celebrate the opening of the new Old Train Station motel grand opening.

The evening comes to an abrupt end when a lightning storm knocks out all the power. At least, that’s what appears to have knocked out the electricity. But things aren’t always as they appear.

Mae West has a way of sticking her nose where it doesn’t belong and finds herself in a dangerous situation when she finds a treasure map that leads to more than just treasure…a dead body!