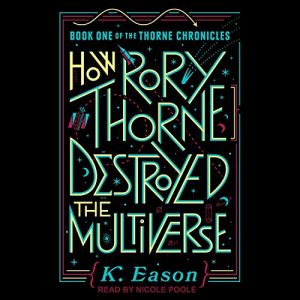 Rory is the first female child born into the Thorne line in ten generations. Reaching back to the home world customs and traditions, the king and his concubine hold a naming ceremony for the child, inviting thirteen fairies; however, no one really believes the fairies are real, or if they are, would take the time to show up. But they do and bestow upon Rory the gifts she will need to be a good leader. However, when Rory is a young girl, things go horrible wrong. Her father is murdered and her mother, having just given birth to Rory’s younger brother, must take over ruling the Thorne Consortium, plunging the kingdom into war with the Free Worlds of Tadesh. In an effort to end the war, Rory’s mother marries the evil Regent of Tadesh, and promises Rory will marry the prince when she comes of age. It is when she arrives on the home station of Tadesh, that Rory begins to uncover a devious plot, with the Regent smack in the center.

How Rory Thorne Destroyed the Multiverse is a fantastic adventure, existing somewhere in the gray areas between fantasy and science fiction. The story takes place in space, with interplanetary travel, and some cool techie things like bots and weapons. But it’s also based in fantasy, with fairies, kingdoms, alchemy, and arithmancy. I loved the mix of “magic” and “science” making this story unique and extremely interesting. I strongly urge readers not to get hung up on genre and instead take a chance on this wild ride.

The story is shared by a historian, and listeners get a mix of third person and omniscient POVs. The narrator sometimes shares facts with the reader that the characters did not know at that time and place, giving readers a working knowledge of the larger picture. This kept me on my toes for nearly the entire story, making the story both engaging and thrilling at times. Additionally, the narrator and several of the characters share an intelligent wit with readers, making obscure references or snide commentary on those around them.

The story spans about 16 years, following Rory from birth until (no spoilers) the conclusion of this adventure. During this time, she gets all the best training possible from the Vizier of Thorne, Rupert, and her body maid/protector, Grit. Coupled with the gifts bestowed by the thirteen fairies, Rory is destined for greatness. I enjoyed watching how she grows over the course of the adventure, putting to use and expanding upon her training. This coming-of-age tale is cutthroat at times, but ultimately uplifting and hopeful.

The supporting characters bring so much to the story, complementing one another and helping Rory be her best. While they are there to support Rory, ultimately each has their own story and part in the adventure. Jade, younger son of Regent Moss (bad guy), actually grows into an amazing individual because of his encounters with Rory.

Narration: This is my first time listening to Nicole Poole’s work, and it won’t be my last. She provides an excellent neutral narrator voice; strong and clear. She alters the dialogue of each character slightly, but more than enough to identify individual characters. She varies the voices to match gender, species, etc. and smoothly jumps from third person to third person without confusion. She reminds my a lot of my favorite female narrator, Lorelei King, but with her own unique voice.

In the end, How Rory Thorne Destroyed the Multiverse is one of the best books I’ve read/listened to so far in 2019. I look forward to finding out more about this incredible multiverse created by K. Eason.

Rory Thorne is a princess with 13 fairy blessings, the most important of which is to see through flattery and platitudes. As the eldest daughter, she always imagined she’d inherit her father’s throne and govern the interplanetary Thorne Consortium.

Then, her father is assassinated, her mother gives birth to a son, and Rory is betrothed to the prince of a distant world.

When Rory arrives in her new home, she uncovers a treacherous plot to unseat her newly betrothed and usurp his throne. An unscrupulous minister has conspired to name himself Regent to the minor (and somewhat foolish) prince. With only her wits and a small team of allies, Rory must outmaneuver the Regent and rescue the prince.

How Rory Thorne Destroyed the Multiverse is a feminist reimagining of familiar fairy tale tropes and a story of resistance and self-determination – how small acts of rebellion can lead a princess to not just save herself, but change the course of history.