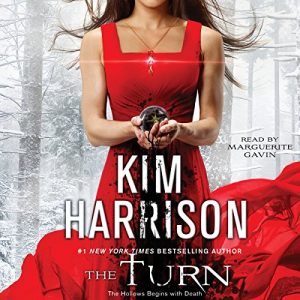 Even though The Turn is a prequel for The Hollows series I would not advise you to start with it. You will be spoiled on so many surprises yet to come in the series. I loved getting looks at characters from the original books, and if you have not met them in all their glory before, the cameos won’t mean as much for you.

Of course, we do not get Rachel Morgan (the lead character in the other books) since The Turn in set in the 1960s before she was born. But we do get a look at Trent Kalamack’s parents and how the human population is affected by the tomato incident that makes Rachel’s world the way it is years later.

I found similarities between Trisk, our lead for this story, and Rachel. They are both strong women in their fields, and are a little on the different side. Trisk is a dark elf. Elves believe the perfect specimen has light-colored eyes (green) and blonde hair, making dark elves (dark eyes and hair) the “black sheep” of the race. Trisk has been made fun of for years for being a dark elf and much of the bullying has been done at the hand of Kal.

Felecia Eloytrisk Cambri (Trisk) and Trenton Kalamack (Kal) have been arch-nemesis for the entire time they’ve known each other from him bullying her as children to a professional rivalry in adulthood. Kal is smug and believes he is the better of the two in the science world. Trisk, being a woman in the 1960s doesn’t have the same professional freedoms as Kal. Soon it’s apparent even to Kal, that Trisk is better at her job than he is at his.

Kal’s pride is the downfall of many things and the start of a new world. There was a small part in the story where he grew on me, and I wanted a HEA for him and Trisk but he showed his true colors as a turd with magnets. The Turn is not a romance but there were a few men in Trisk life who could have been a better life partner for her. I was shipping her and Quinn hard but knew the outcome since this is a prequel.

I cannot believe I wanted to listen to The Turn. I think it was because I was in mourning over the end of The Hollows series. I fell in love with Marguerite Gavin’s narration while listening to The Hollows series. She is Rachel Morgan. NO ONE can replace her. Before I knew she was going to narrate this prequel, I pre-ordered a hardback copy of The Turn. Once I found out Gavin was returning I knew I would have to listen. Her voice, tone, and pacing are perfect for this series.

Even with some world-building, I highly recommend reading/listening to The Turn after you finish The Hollows series to get the full understanding of the world and the Innerlanders aka the supernatural creatures.

My Ratings:
Story: A
Narrator: A

#1 New York Times bestselling author Kim Harrison returns to her beloved Hollows series with The Turn, the official prequel to the series that will introduce fans and readers to a whole new side of Rachel Morgan’s world as they’ve never seen it before!

Can science save us when all else fails?

Trisk and her hated rival, Kalamack, have the same goal: save their species from extinction.

Death comes in the guise of hope when a genetically modified tomato created to feed the world combines with the government’s new tactical virus, giving it an unexpected host and a mode of transport. Plague takes the world, giving the paranormal species an uncomfortable choice to stay hidden and allow humanity to die, or to show themselves in a bid to save them.

Under accusations of scientific misconduct, Trisk and Kal flee across a plague torn United States to convince leaders of the major paranormal species to save their supposedly weaker kin, but not everyone thinks humanity should be saved.

Kal surreptitiously works against her as Trisk fights the prejudices of two societies to prove that not only does humanity have something to offer, but that long-accepted beliefs against women, dark magic, and humanity itself can turn to understanding; that when people are at their worst that the best show their true strength, and that love can hold the world together as a new balance is found.