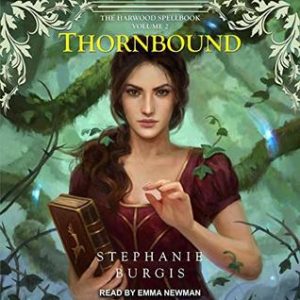 Picking up a few months after the conclusion of Snowspelled, Thornbound follows Cassandra as she fights to open the first ever school of magic for girls. Shared once again from Casandra’s first person POV, we learn that she and Rexum have married; however the Boudiccate is giving him job after job, keeping him away since the day of their wedding. Additionally, Cassandra’s dreams are plagued by thorny vines that strangle and choke her.

I enjoyed following Cassandra into her new adventures as she strives to find her place in the world, one where she no longer has her magic. I cheered along side her as she makes efforts to teach girls magic because it is just and right. However, when outsiders point out how her actions are selfish and harmful, Cassandra begins to question her motives. I felt it was an effective way to suss out the true feelings and opinions of those around her, especially her family. However, I got annoyed when at a critical point in the book, Cassandra, Jonathan, and Amy argued, for quite a long time, slinging around righteous indignation over Cassandra’s actions.

The story is all the more thrilling because of a mysterious traitor who lets in a Fae to cause mischief. Cassandra must work against time to keep her charges safe, while trying to please the upity Boudiccate inspectors.

Narration: Emma Newman provides the wonderful narration for the story. Her crisp British accent is suitable for the location and setting, but also the genre; there is something about a British accent that brings to life a good fantasy. She uses a clear, female voice for Cassandra, altering the dialogue for each character. She adds just enough emotion to benefit the story without overwhelming it. Her male voices are slightly deeper, and she also alters her voices based on the age of the character.

While this is the probably Cassandra’s final tale, the author told me she plans to someday write more in this fascinating world. I look forward to finding out how the Thornfell College of Magic is faring and if Angland survives the changes Cassandra put into motion.

My Ratings:
Story: B
Narration: A-

Review copy provided by the author