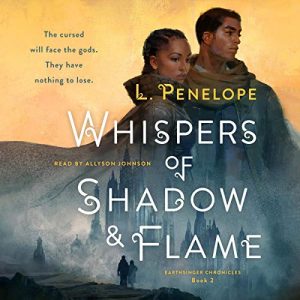 Kyara has the “gift” of Nethersong. It is the opposite of Earthsong – it is death. She’s known as the Poison Flame. She is able to see the “death” in people and force it to accelerate, causing them to die. Forced to kill on behalf of the Truth Father, Kyara longs for her own death to put an end to her curse.

Darvyn is the most powerful Earthsinger in the land. Known as Shadowfox, he is the “savior” of the Lagimar people, but he and his fellow Keepers must stay hidden in the shadows or risk capture by the True Father. Pulled into service at a young age after his mother left him with the Keepers, Darvyn always does what is best for the Lagimar people, yet he longs to find his mother and follow his own path.

Ms. Penelope’s world-building is massive and epic in scope, bringing readers a world where magic is sacred yet stolen by a tyrant, the True Father. With alternating POVs that include both Kyara and Darvyn, along with a couple different Lagimar girls, readers are able to comprehend different perceptions of Earthsong (magic) and the rule of the True Father. I especially enjoyed following Zeli, a seventeen-year-old personal maid whose aspirations represent the bulk of the Lagimaris – just trying to get by and earn a better life than the one they currently live.

While not a romance (no HEA), Whispers of Shadow and Flame features strong romantic elements and personal connections that play into the story and direct much of the action and interactions between the two main characters. Both Kyara and Darvyn are critical pieces on the chess board in a game between the True Father and the Queen Who Sleeps. As they are placed in situations causing them to spend time together, they learn they have much in common and a mutual trust and friendship grows.

Although the story is filled with fascinating world-building and interesting characters, I found that I had a few issues with Whispers of Shadow and Flame. The story builds slowly, and I found myself struggling to stay connected to the plotline and characters for the first half of the book. Additionally, I was bothered that only one character’s POV (young Lagimar girl, Ulani) is shared in present (and future) tense, while the rest of the book is told in past tense. Finally, I was unhappy with how easily resolutions came after the climatic battle scenes.

Narration: Ms. Johnson reads the story in the same soft, feminine voice for each narrator, regardless of whose point of view is presented. It is a soothing and well-spoken voice, however it sounds young, which doesn’t always work for Darvyn and Kyara’s POVs. I don’t know if it’s the narration or the writing or both, but the two main characters sound almost like teenagers. Character dialogue is unique for each speaker. Distinctions are made based on age, gender, and ethnicity. Overall, the voices are pleasing.

The ending of Whispers of Shadow and Flame opens the door to the next chapter of Darvyn and Kyara’s story, and I look forward to finding out where their journey leads them.

My Ratings
Story: C+
Narration: B-

The Mantle that separates the kingdoms of Elsira and Lagrimar is about to fall. And life will drastically change for both kingdoms.

Born with a deadly magic she cannot control, Kyara is forced to become an assassin. Known as the Poison Flame in the kingdom of Lagrimar, she is notorious and lethal, but secretly seeks freedom from both her untamed power and the blood spell that commands her. She is tasked with capturing the legendary rebel called the Shadowfox, but everything changes when she learns her target’s true identity.

Darvyn ol-Tahlyro may be the most powerful Earthsinger in generations, but guilt over those he couldn’t save tortures him daily. He isn’t sure he can trust the mysterious young woman who claims to need his help, but when he discovers Kyara can unlock the secrets of his past, he can’t stay away.

Kyara and Darvyn grapple with betrayal, old promises, and older prophecies—all while trying to stop a war. And when a new threat emerges, they must beat the odds to save both kingdoms.

Reviews in the Series:
Song of Blood & Stone (Earthsinger Chronicles #1)