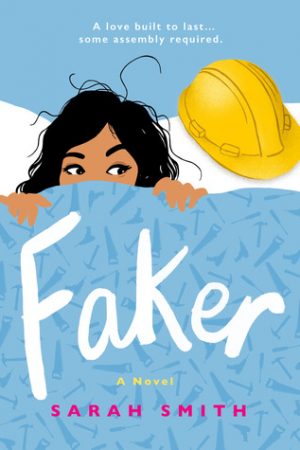 After having a little bit of romance burn out, I turned back to the genre and found a jewel of a novel! Faker is the debut novel by Sarah Smith and I don’t know what she has coming next, but I’m reading it!!

Faker gives us a number of tropes in the romance genre, co-workers, enemies to lovers, and POC heroine. Ok, that last one is not really a trope, but it’s refreshing to read about a non-white heroine.

Emmie is a tough as nails boss. She often goes into “bitch boss mode” as she calls it. She acts overly tough to prove herself in a mostly male company, Nuts & Bolts. Emmie has many layers while trying to keep a tough outside she is a very sweet and fun person. She can’t understand why her co-worker Tate has disliked her from the day they meant.

Tate also has layers, but he only lets people see the quiet and dickish guy. However, it takes a little more to see what’s under that first layer.

These enemies are forced to work together on a project, and after Emmie has an accident on the worksite, Tate surprised her by taking her to the hospital and staying with her for a couple of days. He is very sweet and tentative to her needs. Emmie doesn’t want her stay at the hospital to end because she knows once they are out of the little bubble, they will go back to bickering and “hating” each other.

Faker is a great romance! I laughed, swooned and wish I had my own Tate. I can’t go into details of how they get their HEA because there would be spoilers, but just know watching them falling in love was everything a romance reader needs.  I can’t wait for Smith’s next romance.

Fans of The Hating Game by Sally Thorne will love Faker by Sarah Smith.

Emmie Echavarre is a professional faker. She has to be to survive as one of the few female employees at Nuts & Bolts, a power tool company staffed predominantly by gruff, burly men. From nine to five, Monday through Friday, she’s tough as nails–the complete opposite of her easy-going real self.

One thing she doesn’t have to fake? Her disdain for coworker Tate Rasmussen. Tate has been hostile to her since the day they met. Emmie’s friendly greetings and repeated attempts to get to know him failed to garner anything more than scowls and terse one-word answers. Too bad she can’t stop staring at his Thor-like biceps…

When Emmie and Tate are forced to work together on a charity construction project, things get…heated. Emmie’s beginning to see that beneath Tate’s chiseled exterior lies a soft heart, but it will take more than a few kind words to erase the past and convince her that what they have is real.