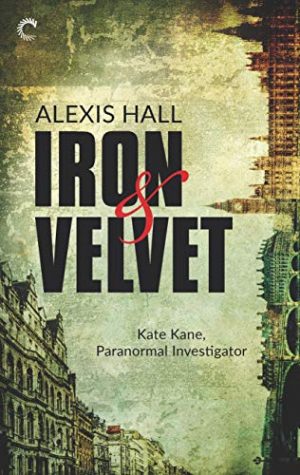 It’s been years since I first encountered Iron & Velvet, and on this new reading, it quickly became clear that no amount of fond remembrance or wistful intent to revisit it has done the narrative justice. To recap: Kate Kane—paranormal private investigator and castoff daughter of the Queen of the Wild Hunt—has just been hired by the Prince of Cups to find out who killed a werewolf outside her nightclub. Things get off to a rough start and go downhill from there, but at least the company is interesting and the sex is good.

In the elapsed time, I’d forgotten how much I truly like Kate. At thirty-three, her priorities include paying rent and not dying. Booze and sex fall somewhere after that, and so on. The world is no longer mysterious and shiny, and the scars and regrets have left their marks. Yet, Kate is still entrancing, her determination and pervasive need to see all the questions answered somehow complementing her wonderfully twisted sense of humor. I have no doubt that she won’t make everyone happy, but I think she’s pretty fantastic.

Another thing I noticed was that the secondary characters seemed a little extra vivid this time around. Julian, of course, was a lot of fun. I liked (nearly) all of them more, Ashriel (the celibate incubus) and Kauri (aka Miss Parma Violet) in particular. But, it was Nimue, the Witch Queen, who I found to be especially fascinating. Considered “less than” by many of the vampires and werewolves because of her mortality, while concurrently being a major threat to both, makes her—and the other mages, in general—worthy of serious attention. Plus, I can’t help but wonder about her past with Kate.

Overall, I was extremely pleased to have the chance to revisit Iron & Velvet. The writing was as wonderful as I remembered, the characters even more enjoyable, and the icky parts far less distracting somehow. Despite the dire state of affairs in places, I still snickered and laughed my way through the whole thing. I’m looking forward to jumping into the second story, Shadows & Dreams, before the release of Fire & Water, the third book in the series, next year.

Last year I broke all of them.

The only rule I didn’t break was the one that said don’t work for vampires. But then a dead werewolf showed up outside the Soho shag palace of Julian Saint-Germain—a bloodsucking flibbertigibbet who’s spent the last eight centuries presiding over an ever-growing empire of booze, sex and hemoglobin.

I shouldn’t have taken the job. The last thing I needed was to get caught in a supernatural smackdown between a werewolf pack and a vampire prince. Even if the vampire prince was dangerously my type. But what can I say? I was broke, I’m a sucker for a pretty face and I gave up on making good decisions a long time ago.