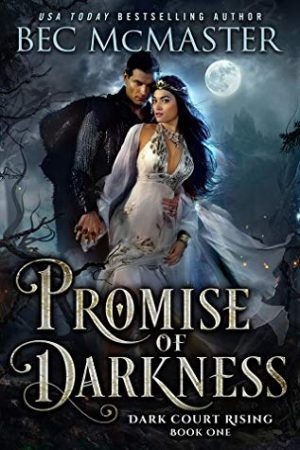 Promise of Darkness is the amazing first book in a new fantasy romance series by Bec McMaster. Dusting off Fae mythology and giving it several exciting twists, Ms. McMaster creates a dangerous new world where five Seelie and three Unseelie courts find themselves in an uneasy peace. The fragile Seelie alliance hinges upon Adaia Queen of Thorns sending her youngest daughter, Iskvien (Vi), to her mortal enemy, Prince Thiago of Evernight, for three months. Loosely based on the Hades and Persephone myth, Promise of Darkness delivers a powerful and heartfelt romance set in a thrilling adventure.

While it’s pretty obvious this is the romance of Vi and Thiago, what makes it so good is the figuring out how they will make it work. I don’t want to spoiler anyone, but I will say at the midpoint of the book, there is a huge “ah ha” moment that answers many questions. I thought I knew what was going on, and had some parts correct, but Ms. McMaster’s story is way better than anything my mind came up with. I loved watching Vi slowly let down her guard and eventually fall for Thiago. Their love is one of those “destined in the stars” type of stories, but it’s not an easy one. They have many obstacles to overcome, and even though the book ends with an HEA, I don’t feel their tale is over.

On top of the romance, there is a war brewing. The battle between Unseelie and Seelie provides a powerful story driver, capturing my imagination from the get go. The world is rich with detail and intricately woven mythology. The fast-paced ride intensifies with each turn of the page, culminating in a few jaw dropping fight scenes. I seriously cannot wait to find out what happens next.

Typically, I enjoy a first person narrative for urban fantasy stories, and it works well in Promise of Darkness. We see the world through Vi’s eyes, uncovering the truths along side her. I thought at first I’d want Thiago’s POV as well, but after finishing the story, I know it wouldn’t have been as powerful told any other way. And while I struggled with the present tense narrative at first, by mid-story, I didn’t even notice it.

In the end, Promise of Darkness kicks off what could be my next favorite series. The story has amazing mythology and passionate characters. Vi and Thiago have a destined love, but they have to work for it. This is the type of story that captures your attention and doesn’t let go, leaving you wanting more. There is good and bad, but Vi and Thiago prove it’s the gray in between where the best stories lie.

In a realm ruled by magic, the ruthless Queen of Thorns is determined to destroy her nemesis, the cursed Prince of Evernight.

With war brewing between the bitter enemies, the prince forces Queen Adaia to uphold an ancient treaty: she will send one of her daughters to his court as a political hostage for three months.

The queen insists it’s the perfect opportunity for Princess Iskvien to end the war before it begins. But one look into Thiago’s smouldering eyes and Vi knows she’s no assassin.

The more secrets she uncovers about the prince and his court, the more she begins to question her mother’s motives.

Who is the true enemy? The dark prince who threatens her heart? Or the ruthless queen who will stop at nothing to destroy him?

And when the curse threatens to shatter both courts, is she strong enough to break it?

A fairytale twist inspired by the Hades and Persephone myth.