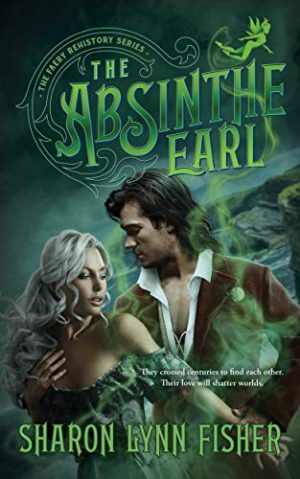 Sharon Lynn Fisher is one of those authors who’s brain I like to camp out in for a day.  She thinks in different directions than most fantasy and sci-fi writers.  Her new book, The Absinthe Earl, is unlike anything I’ve reviewed of hers before. It is predated by her 2016 release of Before She Wakes: Forbidden Fairytales, a collection of dark, short, erotic fairytales which had mixed reviews. I think she shines in the full-length novel where she can fully indulge her imagination.  The book of short stories was the warm-up to her timely release for Halloween of The Absinthe Earl.  It is a full-length novel which dives into the world of the fae folk in an alternative Ireland.  The story is set before the great potato famine of 1845 and Ireland is not under British rule, but rather still has her own monarchy with Queen Isolde, cousin to the Earl of Meath, at its helm and protecting her people. She’s also, maybe, a little crazy.

The Earl of Meath, Edward Donoghue, is plagued by sleepwalking and hallucinations. He’s concerned the madness his cousin exhibits might run in the family. Drinking absinthe seems to keep them both at bay. Absinthe has a natural bright green color and is commonly referred to in historical literature as “la fée verte” or the green fairy. Despite being created in Switzerland for medicinal purposes, its name and color makes it right at home in Ireland. There is aura of illicitness and mystery surrounding absinthe that has earned it a reputation as a mysterious, addictive, and mind-altering drink.

“Absinthe was traditionally served with water and a cube of sugar.  The sugar cube was placed on an absinthe spoon (a small slotted spoon), and the liquor was drizzled over the sugar into the glass of cold water until the sugar was dissolved and the desired dilution was obtained. The sugar helped take the bitter edge away from the absinthe, and when poured into water, the liquor turned a milky white. The spoons themselves were often works of art, covered with filigree flowers and stars, or shaped like sea shells. Men and women became enthralled with the ritual of presentation as well as with the appearance, taste, and excitement of the liqueur.”

Ada Quicksilver has silver hair even though she’s a young lady of college age. Folklore says it means she’s marked with fae blood. Having traveled from England to Ireland to do research for her thesis on fairies, she meets Edward at an inn where he is engaged in the absinthe ritual, something she doesn’t question given her location. The meeting is fortuitous because Edward needs her expertise in fairy lore, and she needs his connections to access historical sites to further her research. The two set out on a trip that turns quickly into an adventure neither could have imagined because fairies aren’t real…or are they?

The love story between Ada and Edward is sweet with a certain Victorian propriety.  There are larger forces at work, however, pushing them together.  This is probably my single criticism and that is the few times they are intimate, it felt out of character. As soon as they got dressed, they were back to polite distances.  It almost would have been better if they gave in for the sake of those larger forces and saved their own relationship for after a possible marriage as would have been appropriate for their historical setting.

Maybe because she is a sci-fi writer first, there is a nod to inter-dimensional travel—but in a Peter Pan fantasy kind of way. Overall, it was just a fun read, perfect for when the air crisps, leaves crunch, and spirits come out to play tricks on mortals. I’m thrilled that there are more to come.  This is your one to read as a reward for raking the leaves.

Miss Ada Quicksilver, a student of London’s Lovelace Academy for Promising Young Women, is spending her holiday in Ireland to pursue her anthropological study of fairies. She visits Dublin’s absinthe bars to investigate a supposed association between the bittersweet spirit and fairy sightings.

One night a handsome Irishman approaches her, introducing himself as Edward Donoghue. Edward takes absinthe to relieve his sleepwalking, and she is eager to hear whether he has experience with fairies. Instead, she discovers that he’s the earl of Meath, and that he will soon visit a mysterious ruin at Newgrange on the orders of his cousin, the beautiful, half-mad Queen Isolde. On learning about Ada’s area of study, he invites her to accompany him.

Ada is torn between a sensible fear of becoming entangled with the clearly troubled gentleman and her compelling desire to ease his suffering. Finally she accepts his invitation, and they arrive in time for the winter solstice. That night, the secret of Edward’s affliction is revealed: he is, in fact, a lord in two worlds and can no longer suppress his shadow self.

Little does either of them realize that their blossoming friendship and slowly kindling passion will lead to discoveries that wrench open a door sealed for centuries, throwing them into a war that will change Ireland forever.