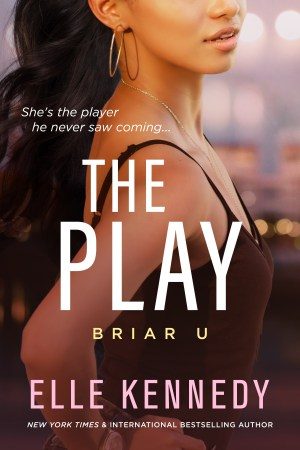 Wow.  I think I’m in love. The Play, book three in the Briar U series, was everything I didn’t know I wanted it to be. I knew going in that it would focus on Hunter Davenport, but I didn’t really know him well enough to predict how an entire book with him as the focus would play out. In the first series, Off-Campus, he was window dressing, background, almost a prop for the main characters. As The Briar U series began, he became a more significant character.  With this book, Kennedy finally let us into his head.

The Play picks up right where The Risk left off. There is blessedly little rehashing of previous storylines, and while they aren‘t necessary background, those who have read them will more fully enjoy this installment. We met Hunter in the first series as a cocky and talented freshman member of the hockey team. Dean Di Laurentis took him under his wing and he became Dean’s man-whoring protege.  In The Chase, we see a little more of his real personality when he makes himself vulnerable, hoping to turn his crush on roommate and Dean’s little sister Summer, into an actual relationship.  He does everything right, but still gets rejected.  When he took Summer home from their dinner date that didn’t get as far as appetizers, everyone hurt for him. We all felt that rejection.

Hunter spent The Risk bedding any woman who so much as smiled at him to bury his pain.  Unfortunately that landed him in a situation which cost Briar an important hockey game. He then goes to the other extreme, vowing celibacy and total devotion to the team as penance for his misjudgment. It’s a hilarious 180 that when Summer came to the house, she was the only woman and now, as The Play begins, it’s full of women and Hunter is the only male roommate. The man is literally surrounded by women as he decides he’s closed for business.  It’s at this point that he begins his junior year, functioning as team captain, and gets paired with Demi Davis for an important semester long project. Demi is smart, funny, and extremely attractive.  Demi also has a boyfriend to whom she’s lovingly loyal.  They‘ve been together for years.  So much the easier to stay hands-off. So how is this a story about Hunter and Demi?  I’ll save it for you.  It has some pretty epic moments, not just one peak crisis.

There is a twist that I did not entirely see coming.  Good story telling leads you somewhere logical so I love it when an author can surprise me. Like her earlier books where Kennedy did not stay away from difficult realities which plague college-age students, she takes on a heavy topic in The Play as well.  I saw that as an addition to the authenticity of the story and her writing style, not something that detracted.

I have one criticism and I’m not entirely sure it is one… Demi is considering a career in mental health and there are several joking references to serial killers.  This reminded me of Grace and Logan’s story, The Mistake.  If Demi follows through on this possibility, I like to imagine she and Grace would work together on some future major investigation. The thing I think I liked best about this book is that it’s longer than some of her previous reads.  I got to stay in Hastings, Massachusetts just a little longer. It also meant there was room to check-in with a few of the guys from the Off-Campus series.

Kennedy’s regular readers will be glad to know that the penises are present.  In fact, we’re introduced to a new term, “Penis eyes.”  I won’t elaborate.  I’ll let you enjoy the moment.

Mike Hollis lovers will be pleased with his and Rupi’s presence as a continuing side story. I didn’t think they could get better, but they manage to one up themselves.  Once again, bless Mike Hollis.  I swear the guy is going to accidentally invent something the world needs and become the equivalent of James Franco’s Laird Mayhew in Why Him? The more I think about it, the more I want this book. I want to see the families meet and the epic, and I mean epic wedding.  There should be elephants, celebrities, and fifteen bridesmaids in dresses the size of Volkswagons. It would be My Big Fat Gypsy Wedding goes to Bollywood.

With a tidy bow on The Play and everyone we know currently paired up, I’m wondering if there will be a book four.  Kennedy did use this book to introduce us to a variety of new team members and she could pull any one of them up to the—plate? Net?  Center ice?  I‘m mixing metaphors…anyway, perhaps Conner who plays a role in Hunter and Demi’s story at a pivotal moment. Perhaps we’ll have a third series? There are some openings in the off-campus house which has been the backdrop of both series. Did Tucker take his pink oven gloves when he moved out or are they still in the kitchen?  Did the bathroom lock Hollis repaired stay repaired?  Has anyone steam-cleaned the living room sofas?  Clearly, I’m invested.  I want Kennedy to keep going indefinitely.

What I learned after last year’s distractions cost my hockey team our entire season? No more screwing up. No more screwing, period. As the new team captain, I need a new philosophy: hockey and school now, women later. Which means that I, Hunter Davenport, am officially going celibate…no matter how hard that makes things.

But there’s nothing in the rulebook that says I can’t be friends with a woman. And I won’t lie—my new classmate Demi Davis is one cool chick. Her smart mouth is hot as hell, and so is the rest of her, but the fact that she’s got a boyfriend eliminates the temptation to touch her.

Except three months into our friendship, Demi is single and looking for a rebound.

And she’s making a play for me.

Avoiding her is impossible. We’re paired up on a yearlong school project, but I’m confident I can resist her. We’d never work, anyway. Our backgrounds are too different, our goals aren’t aligned, and her parents hate my guts.

Hooking up is a very bad idea. Now I just have to convince my body—and my heart..