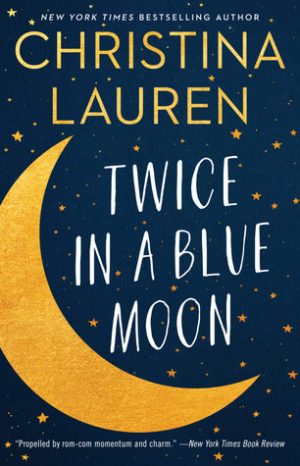 Twice in a Blue Moon is the newest standalone novel by writing duo, Christina Lauren.  It’s a second chance romance between Tate and Sam. They first met on vacation in London, Tate with her grandmother after graduating high school and Sam with his step-grandfather. While Tate is 18 years old, Sam was 21.

They fall fast and hard for each other. Until Sam betrays Tate’s secret of being the daughter of a high profiled movie star to the press. Said star is her estranged father who Tate has not seen in 10 years.

Fast forward 14 years to the present time when Tate is now a famous actress shooting a movie with her father. They don’t have a true father, daughter relationship. Their reconnection since Sam outing Tate in London 14 years has been all for the public eye.

Twice in a Blue Moon deals with Tate and Sam working together on the movie since he is the screenwriter. While their romance was sweet when they were younger, it’s all grown up now. They work through what happened in London and find a HEA.

I enjoyed Twice in a Blue Moon for the most part but I felt like Tate’s dad could have been left out. I really didn’t like him and I thought was a poor plot device toward the end of the story to cause conflict between Sam and Tate again when it wasn’t needed.

Sam Brandis was Tate Jones’s first: Her first love. Her first everything. Including her first heartbreak.

During a whirlwind two-week vacation abroad, Sam and Tate fell for each other in only the way that first loves do: sharing all of their hopes, dreams, and deepest secrets along the way. Sam was the first, and only, person that Tate—the long-lost daughter of one of the world’s biggest film stars—ever revealed her identity to. So when it became clear her trust was misplaced, her world shattered for good.

Fourteen years later, Tate, now an up-and-coming actress, only thinks about her first love every once in a blue moon. When she steps onto the set of her first big break, he’s the last person she expects to see. Yet here Sam is, the same charming, confident man she knew, but even more alluring than she remembered. Forced to confront the man who betrayed her, Tate must ask herself if it’s possible to do the wrong thing for the right reason… and whether “once in a lifetime” can come around twice.