Favorite scenes are hard. I’m gonna let you in on a secret—there are scenes I loved writing, and grin over every time I read them, but they don’t end up in the final manuscript. I have scenes I hated writing, but in the end, they felt necessary, and I couldn’t imagine the book without them. This scene was one of the second. I cried like somebody was dying while I was writing this scene. I think partly it’s because Tanner is so vulnerable in this moment, and Duke filters it through his own vulnerabilities and even though he “doesn’t even like her,” he’s the one person in the room who follows to check up on her. He’s the one person who sees her hurting and wants to do something about it. It’s a “favorite” scene, because it’s one of the earliest scenes where he sees common ground with her, whether he likes it or not. Enjoy! -VN 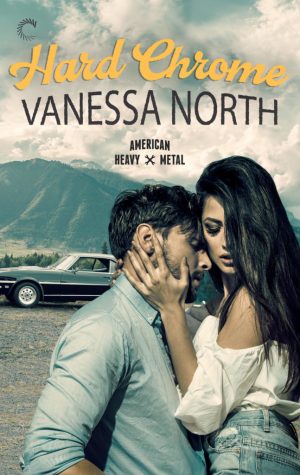 Alfie and I are watching Auburn humiliate Tulane when two cars pull into the driveway, headlights streaking across the windows.

“Is that—” I swear to God, one of them sounds like Tom Ellis’s ’68 Camaro. I start to stand, but then the door swings open and Tegan strolls through it, tossing a set of keys at Alfie. He snatches them out of the air on reflex, and grins.

She shakes her head. “We made her take the Camaro. You don’t have to drive her to work anymore.”

The words burn in my chest—jealousy? Of her inheriting the car? I’m not a materialistic guy, and it’s not like I coveted that car the way some people did—I prefer the ’69 model myself. But it was Tom’s, and even the sound of its engine is a reminder he’s never going to drive it again.

“Hi.” Tanner enters without the swagger of her younger sister, looking tired and fragile, a reusable Ingles shopping bag dangling from her hand like it—or she—is carrying the weight of the world. Oh, she’s every bit as pretty as the other night at the bar, but tonight she looks like the slightest touch would shatter her. So I’m surprised when she leaves the bag by the door, crosses the room, sinks down on the couch next to Alfie, and tucks her head on his shoulder.

“You okay?” He nudges her knee with his own, and she nods.

“Kinda in my feelings tonight. Scared I’m going to let everyone down.”

“It’s just a car, Tanny.” Tegan heads toward the kitchen. “You guys got the Auburn-Tulane game on?”

She comes back with three bottles dangling from her left hand, a bag of corn chips in the right. “Tanny, did you bring any leftover chili?”

“Tiff’s Texas red?” My stomach rumbles—I didn’t even know I was hungry, but Tiff’s chili is worth the face-melting pain.

“It’s in the bag.” She gestures to the abandoned Ingles bag.

Tegan drops a beer on my coaster, hands another one to Tanner, and serves up the chips and a Tupperware container of chili as dip before dropping down to the floor to watch the game.

“Who are we rooting for?” she asks.

“Tulane—” I start, but Alfie cuts me off.

“Auburn—” He breaks off and stares at me. “Really? Haven’t heard you cheering.”

“Ain’t really anything to cheer about when they haven’t scored. Anyway. I just think I’d rather see Georgia play Tulane than Auburn.”

“You really don’t give a sh*t about rivalries, do you? What fun do you even have watching the game?”

The question burns—my face, my ears, everything on fire. What do you even say to a question like that? Football means no dogfights? Means Ma goes to her sister’s house and I’m the only one around to beat? Football means peace in a household that has none?

“Devil has enough advocates,” Tanner says in that quiet, stretched-thin voice. We make eye contact, and it feels like she sees right through me.

Her mouth flattens into a thin line, and then she offers me the barest smile.

“Hey, Tan, Brendan’s sister is a real estate agent. He gave me her card for you.” Alfie pulls the card out of his pocket and puts it in her hand, deftly changing the subject.

“I can’t afford to buy anything right now.” She starts to hand it back to him, but he stops her.

“She handles rentals too. Just call her.”

“Thanks.” She picks up her beer, fiddles with the label for a minute, and then stands and wanders out of the room, and something in me seems to split at a seam. Do I stay? Watch the game, which I’ve been caught out not really giving a sh*t about? Do I check on her? She doesn’t even like me—hell, I don’t even like her.

Tegan and Alfie both shout as Auburn scores again.

Since I never met trouble I couldn’t land in face first, I stand and follow Tanner out to the kitchen.

She’s leaning over the sink, her eyes closed, breathing slow like she’s in a yoga class. Elbows locked, knuckles white. I get the feeling if she let go of that countertop, she’d crumple to the ground.

She nods, not opening those pretty eyes for a long moment; then she turns and she stares right at me. “Do you know what it’s like to have everyone counting on you? And you know you’re going to let them down, but you can’t say no, so you just let it happen?”

And I’m twenty, when they finally lock him up for fighting dogs.

And I’m tired and relieved when he gets time added to his sentence for punching a guard, because it means I don’t have to stand up there again and watch my mother’s heart break when all I ever wanted was my family to be safe.

And still he got paroled.

Can she? I don’t know. Tom Ellis didn’t raise no fools. Maybe she’s looking for an out, any excuse to cut and run, and she just needs someone who isn’t her family to give it to her.

“I don’t think you want to. I don’t think you love the cars, or the work, or this town.” I swallow, hard. “Families are f*cked up, all of ’em. I get why you want to stay. I just don’t get what hurting yourself and them to prove something does for anyone.”

She scowls then turns back to the sink and her yoga breathing. My fingers itch to touch her, to comfort her somehow, but I can take a hint. Besides. I don’t even like her.

Tanner Ellis left American Heavy Metal in her rearview mirror. She didn’t see the beauty behind the grease stains and the polished chrome until it was too late. Now she’s back, determined to save her father’s legacy—and bring the South’s premier classic-car shop into the new century. Nothing is going to stop her—especially not the sexy tech who refuses to follow her lead.

American Heavy Metal is the only home Duke Wilson’s ever known, and no high-heeled, sharp-tongued princess is going to take it away. He tolerates Tanner’s advice, and it’s fun to push her buttons, but she doesn’t belong in the shop—never has, never will. The sooner she realizes that, the sooner he can find his new normal.

When Tanner falters, revealing the pain beneath her bravado, Duke comforts her the only way he knows how. And when violence from his past threatens their future, she’ll be there for him, offering him the one thing he’s always wanted—a shot at a real family. He just has to convince himself to take it.

Vanessa North is a romance novelist, a short fiction geek, and a knitter of strange and wonderful things. Her works have been shortlisted for both the Lambda Literary Award and the RITA© Award, and have garnered praise from The New York Times, The Washington Post, and Publisher’s Weekly. She lives in Northwest Georgia with her family: a Viking, twin boy-children, and two large dogs.

Vanessa North is celebrating the release of HARD CHROME with a big giveaway! Three prizes are up for grabs: (2) $10 Amazon Gift Cards and (1) Signed Paperback of Hard Chrome + some serious auto-shop inspired swag!