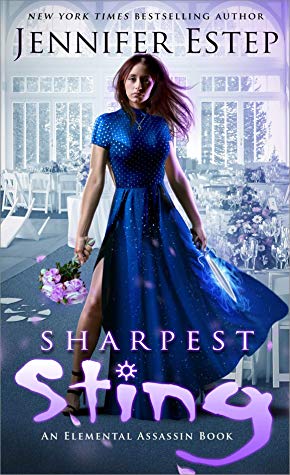 “I didn’t think our date night would end up here.”

I looked over at Owen Grayson, my significant other. “I thought you were looking forward to our quiet time,” I said. “You, me, together in the dark, having a nice romantic interlude.”

“Oh, you and me together in the dark is one of my favorite things.” Owen’s voice took on a low, husky note that sent chills racing down my spine, and a sexy grin slowly curved his lips.

The moonlight streaming in through the windshield frosted the tips of Owen’s black hair, bringing out the blue sheen in the thick locks, and added a soft, silvery tint to his face, as though he was made of polished marble instead of flesh and blood. Violet eyes, a slightly crooked nose, a white scar that cut across his chin. The small imperfections gave Owen a rough, rugged vibe that only made him that much more handsome to me.

Even better, his minor flaws, both physical and otherwise, fit together perfectly with my own many sins and much deeper faults. Sometimes I thought we were like two pieces of a jigsaw puzzle that had snapped together, despite the small odds of us ever finding each other.

“Oh, yeah. You and me together in the dark is always great.” His grin slowly faded away. “It’s the location that concerns me.”

Several minutes ago, Owen had pulled his car over to the side of the twisty mountain road. In the distance, a large sign gleamed in the moonlight, the letters spelling out a familiar name: Blue Ridge Cemetery.

“Don’t get me wrong. I always love spending time with you, Gin.”

I arched an eyebrow. “But?”

“But when you suggested a date night, I was hoping for something warm and cozy. You, me, a roaring fire, some good food, maybe a nice bottle of wine.”

“We already had some good food,” I said. “Or have you forgotten about the rehearsal dinner already?”

We had spent the last three hours at the Five Oaks Country Club. Our friends Mallory Parker and Stuart Mosley were getting married in a few days, and Owen was a groomsman, while I was a bridesmaid. After running through the ceremony, Mallory and Stuart had treated the wedding party to a private dinner at the club.

Grilled chicken kebabs served with a warm fig dipping sauce. Filet mignon sliders slathered with tangy blue-cheese mayonnaise. Crispy spring rolls filled with sweet-and-sour carrots, cabbage, and other veggies. And those had just been the appetizers. The main course had been roasted, apricot-glazed turkey with apple-sage dressing and mashed potatoes. For dessert, we had enjoyed a decadent pear bread pudding drizzled with warm caramel sauce and topped with vanilla-bean ice cream. The food had been absolutely delicious, and the company of our friends even better.

“The rehearsal dinner was great.” Another sly grin curved Owen’s lips. “But I was looking forward to having a nightcap at your place.”

I rolled my eyes. “You’ve been hanging around Finn too long. That cheesy line sounds like something he would say.”

Finnegan Lane was my foster brother and had been a shameless flirt until he’d gotten involved with Detective Bria Coolidge, my baby sister. Finn still liked to flirt, but everyone knew his heart belonged to Bria.

“You can’t blame a guy for trying,” Owen replied. “Either way, I was hoping for something a little less…”

I didn’t begrudge Owen his dreams of a more typical date night. I would much rather have been curled up somewhere warm and cozy with him, instead of sitting in his car, slowly freezing in the dark.

But I was Gin Blanco, the supposed queen of the Ashland underworld, and this was my life, like it or not.

“What do you think?” Owen asked, looking through the windshield. “Are we clear?”

I checked the time on my phone. Ten minutes had passed since we’d stopped and Owen had stuck a plastic bag in the driver’s-side window, as though we were having engine trouble. Owen and I had been waiting to see if we were being followed, but not a single vehicle had zoomed by. Most people didn’t like visiting cemeteries in the daylight, much less on a cold winter’s night.

I peered into the woods that flanked both sides of the road, but nothing moved in the shadows, and I didn’t see any human-size shapes lurking farther back in the trees. “We’re clear.”

We got out of the car. Owen popped the trunk, and we each grabbed a thin black vest, along with a pair of heavy-duty black coveralls. Owen put his vest and coveralls on over his navy suit. I ditched my heels, zipped my vest and then the coveralls up over my royal-blue pantsuit, and shoved my feet into a pair of socks and then boots. We both pulled black toboggans down over our hair, completing our transformation from normal folks out for a night on the town to a couple of cat burglars up to no good.

Then again, as the assassin the Spider, I was almost always up to no good.

“You ready?” Owen also grabbed two shovels out of the trunk.

“Yeah. But why are you suddenly so eager to get on with our mission?”

Owen grinned, his eyes glimmering like amethysts in the moonlight. “Because I still have hopes for that fire, food, and wine tonight.”

I snorted. “I’m starting to think fire, food, and wine is code for sexy times.”

“Sexy times? Now you sound like Eva.” His grin widened. “Although my sister does have a way with words.”

I crinkled my nose. “You are totally ruining your attempt at suave, seductive charm by bringing up your baby sister.”

“Well, then, I’ll have to try harder and make it up to you later.”

Owen reached out, grabbed my hand, and pressed a kiss to my knuckles. The heat of his skin soaked into mine, and those chills pleasantly zipping through my body settled in my stomach and spread out, turning into warm waves of anticipation.

Owen released my hand and straightened. “After all,” he murmured, another mischievous grin spreading across his face, “this humble blacksmith does so love to please his pirate queen assassin.”

I groaned. “Don’t remind me about the renaissance faire.”

A couple of weeks ago, Owen and I had attended the Winter’s Web Renaissance Faire in Riverfront Park. What had started as a fun, innocent event had quickly spiraled into a dangerous confrontation, with Owen getting kidnapped and both of us almost dying at the hands of Darrell Kline, a greedy, disgruntled accountant who had wanted to steal everything from Owen.

“Look on the bright side,” he rumbled. “At least we won’t run into any costumed characters with swords tonight.”

“No, but we might run into Hugh Tucker and some Circle goons instead.”

The muttered words slipped out before I could stop them. Owen’s grin vanished, and a troubled look filled his face.

I grimaced. Way to kill the mood, Gin.

Hugh Tucker was my personal nemesis, a smart, cunning vampire who worked for the Circle, a secret society responsible for much of the crime and corruption in Ashland. For the last few months, I had been investigating and slowly killing my way through the Circle ranks, trying to find the group’s leader, the person who had sent Fire elemental Mab Monroe to murder my mother and my older sister. A few weeks ago, I’d finally found that leader, the head of the monstrous hydra, as it were.

The revelation had come as an absolute shock, like lightning striking my head, a knife plunging into my back, and a bomb exploding underneath my feet all at once. I’d known that my mother, Eira Snow, had been a member of the Circle, but I hadn’t realized that my father, Tristan, had also been part of the group. My father had supposedly died in a car accident when I was a kid, so I didn’t remember much about him, and I knew nothing about his family.

I had certainly never dreamed that his brother, my uncle, was the root cause of so much pain, misery, and suffering in my life. But now that I’d found out about Uncle Mason, I was determined to kill him.

Owen kept staring at me, that troubled look still on his face, so I forced myself to smile as though nothing was wrong.

“You’re right. We won’t run into any costumed characters tonight, which is a definite plus after what happened at the ren faire. So let’s go.”

“Why the sudden hurry?” he asked.

I leaned over and kissed his cheek. I breathed in his rich, metallic scent, then drew back. “You’re not the only one looking forward to fire, food, and wine tonight. The sooner we leave here, the sooner we can get there.”

“Work first, nightcap later?” Owen teased me again. “That could be your new motto as the Spider.”

“When it comes to you and me?” This time, my smile was completely genuine. “Definitely.”

As Gin Blanco, aka the assassin the Spider, I’m used to having a target on my back. But ever since I started investigating the secret society known as the Circle, that target seems bigger than ever.

Still, I’m trying to relax and enjoy the events leading up to my friends’ wedding when I learn that an old enemy has returned to Ashland. And that’s the just beginning of my latest nightmare. Soon, I have Circle goons watching my every move, but I have no choice but to continue searching for a key piece of evidence against the evil group.

The deeper I dig, the more horrifying secrets I uncover, and the more dangerous things become for me and my friends. Just when I think I finally have a handle on things, a shocking revelation shatters my heart and leaves me with an ugly realization—that betrayal is the sharpest sting of all …

Jennifer is also the author of the Crown of Shards, Mythos Academy, Black Blade, and Bigtime fantasy series.