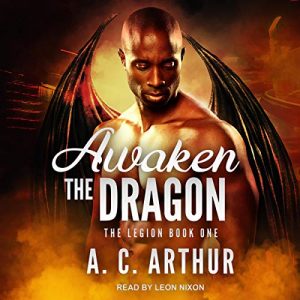 Theo Masters is a powerful half human, half dragon. Living in the human realm and keeping his beast buried, he runs the Legion Security Company, protecting the world from paranormal threats. His firm is hired to protect Shola N’Gara for two weeks before she is to be married to a man she has only met once. She is from a small African village and part of a river tribe, never having left her village before. What Theo doesn’t know is that Shola has come to the western world not to marry, but to take care of a threat to her people.

Awaken the Dragon is a well-written paranormal romance. It hits all the right notes for fans of the genre: powerful alpha and strong female, prophecies and power, insta-love and meant to be’s, dark evil and brave good. Theo’s beast awakens and recognizes something in Shola the moment they meet, and their mutual attraction is off the charts right from the get go. In fact, it was so all-consuming, that at times (in the beginning of the book), I felt it was stressed a bit too much, and I wanted more actual storyline.

The story is packed with action. Someone/thing/group is after Shola, and while Theo is trying to keep her safe by keeping her locked down, Shola refuses to be caged. This puts the pair at odds for a while, adding to the tension and creating additional conflict for the pair. Through these skirmishes, we learn more about the dragons’ abilities and find out about vampires.

Narration: The story is shared via third person POV, primarily alternating between Theo and Shola, but once in a while we see things from the villain’s POV. Mr. Nixon has a soothing, calm voice, but alters to impart urgency and strong emotion. His third person narrator’s voice alters ever so slightly when shifting POV, with Shola’s POV slightly softer. He alters the dialogue to match each character’s person, age, background, etc.

Awaken the Dragon creates a new paranormal world filled with interesting mythology, some of it standard, and some of it new. It’s a solid story and romance. However, I just don’t find PNR’s my thing anymore. I like a more drawn-out romance and time in the “gray,” rather than the fated pairings. Theo and Shola are both powerful, good “people,” but overtime I started to lose interest. The romance was hot, but they didn’t have to work for it, so it didn’t feel earned or real. There is good conflict that gives the series some solid potential, and I whole-heartedly recommend to fans of the PNR genre.

My Ratings:
Story: B-
Narration: B

Next in line for the Drakon throne, Theo Masters is the most powerful half human, half dragon in the world. Royal power is the last thing he wants, however. He lives as a human and runs the Legion Security Company. But his new client—a mysterious, beautiful human from a small African village—and the unknown danger she faces may forever change the quiet life that he’s chosen.

Shola N’Gara exists to kill the dark spirit that is attempting to demolish her people. It’s her purpose and her destiny. The gorgeous protector who taunts her with his sexy voice and body is not—especially after he shifts into a magnificent black dragon with turquoise eyes.

A rise in demon activity and the brutal murders Theo’s agents have been reporting start to add up. Someone is making a play, and it’s big enough to change the course of the world as they know it. Now Shola must choose between her destiny and her heart. And Theo must decide if standing by the woman he’s fallen in love with is worth facing his father in a battle to the death.