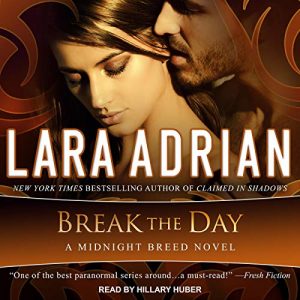 After feeling as though he let his team and the Order down when he brought a spy and killer into their home, Rafe thinks the only way to make amends is to take a mission that puts him deep undercover. Only his parents and a few higher-ups know that he really hasn’t parted ways with the Order. While it hurts to lie to his friends and teammates, he uses his cover to get in with a local gang with potential ties to the terrorist group, Opus Nostrum.

Devony’s entire family was killed in the Opus Nostrum attack on the London JUSTIS office, and she wants revenge. Working solo, she’s imbedded herself as a human in the same gang Rafe and the Order have in their scope. When Rafe discovers she’s actually a rare Daywalker Breed female, the pair must decide if they can trust one another and work together to bring down a common enemy.

Break the Day is a typical Midnight Breed story filled with action and romance. The stakes are high, keeping the adrenaline pumping as our main characters race against time to ferret out the Opus Norstrum connections. This is definitely a good one for fans of the series. I really enjoyed the pairing of Devony and Rafe. Both feel isolated because of recent events, and although there is a strong mutual attraction, they bond over their situation as well. I like that (most of) the truth about why they are each with the gang comes out quickly. Working together, they are a great team, and it affords them the opportunity to explore their desires.

The story is another good one, but there is still so much unknown about Opus Nostrum. The story did give some answers to questions raised in earlier books, but the larger story arc didn’t really progress. Regardless, it was still an exciting story. However, there are a couple of things about these stories that are starting to wear on me. First – I get annoyed that the hero always feels he is not worthy of the female lead, and he constantly is thinking or saying something to that effect. Second – the author spoon feeds the reader every emotion and thought. We are told exactly where the characters stand rather than actions speaking for themselves or providing inference.

Narration: Ms. Huber provides a lovely narration for the title. Her narrator voice is very matter-of-fact and straightforward and even shifts slightly between the two POVs (Rafe and Devony). His narrator is a bit rougher and clipped, while hers is softer. And every character has a unique voice. Ms. Huber supplies a large variety of fabulous accents. All-in-all an enjoyable performance.

My Ratings:
Story: B/B-
Narration: A-

After a shocking betrayal nearly killed him and the people he cares about the most, what Breed warrior Rafe wants more than anything is revenge against the insidious brotherhood called Opus Nostrum. But to achieve that goal, he must turn his back on the Order and infiltrate a dangerous gang with ties to Opus. Risking everything to redeem himself and carry out his deep-cover mission, Rafe will let nothing stand in his way–least of all his desire for one of the loyalists he should despise, a mysterious, dark-haired beauty named Devony Winters.

But Devony has secrets of her own to protect, as well as a personal duty she will do anything to fulfill. And as a daywalker passing herself off as human to the gang she’s been embedded with for months, the last thing she needs is a dangerous former member of the Order unraveling all her hard work. Her plans depend on keeping Rafe at arm’s length, but if she surrenders to the dark need he stirs within her, it will be her heart that pays the ultimate price.