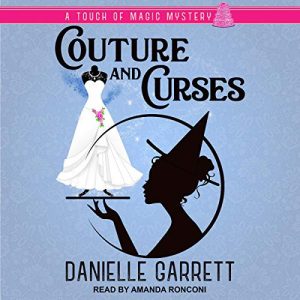 Picking up roughly six months after the conclusion of book one, Newly Wed and Slightly Dead,  Couture and Curses brings listeners up to speed on magical wedding planner Anastasia Winters and her boyfriend, SPA agent Kaleb, as they make the circuit around the Seattle Haven’s Wedding Show. While they aren’t there for personal reasons, the fact that Kaleb is willing to go to the show just to spend time with Ana is telling of how much their relationship has progressed since we last saw the pair. I really enjoy how the author is progressing this couple – they are happy together, not in a rush to marry, but know there may be a future together. The drama is limited to the murder investigation, and the pair deals with any personal issues by talking it out.

A famous wedding dress designer, and friend to Ana, is struck with a curse and Ana happens to be in the blast radius. She turns to her boyfriend and the SPA to help solve the case. I liked that Anastasia isn’t obsessed with crime fighting or catching the bad guy. She just happens to be in the middle of the investigation, once again, and wants to help save the life of her friend. Anastasia is a solid character – an “average” woman trying to make ends meet and live her life. Nothing crazy or out of the ordinary, and even her magic isn’t above average. Although there are some hints something great may be coming for Ana.

There is more drama at Ana’s office, and once again Ana finds herself with bad publicity and in a difficult spot with her job. Since this just happened in the previous book, I wasn’t a fan of seeing it again in Couture and Curses, especially since the repercussions of what happened aren’t addressed by the end of the book.

Narration: I’ve been listening to Amanda Ronconi read the two Beechwood Harbor series, and now this spin-off, for over a dozen books or so, and she has consistently done a wonderful job. The Touch of Magic Mysteries is voiced from the first person POV of Anastasia. Ms. Ronconi gives Ana a solid presence, without confusing me as to the other main characters Holly and Scarlet (although neither are in this book). She provides enough differences between character voices to make each distinguishable from the next. Her male voices are generally deeper and fitting and familiar if you’d listened to the other series. However the characters and setting/story are different enough not to cause confusion when listening.

When sparks and curses fly, more than just high-profile weddings are thrown into danger.

Every wedding-planning witch worth her wand knows that the dress must be an Aurelia custom creation. The magical fashion designer to the who’s who of the Seattle Haven is in high demand with a waiting list that would make most wedding planner’s eyes water.

Luckily for her clients, witch wedding-planner extraordinaire Anastasia Winters has inside access to the famed fashion designer and a knack for making deals. However, on an after-hours errand to pick up a dress, Anastasia finds herself walking into a battleground. When the dust settles, Aurelia is locked in the grips of a powerful – and seemingly unbreakable – curse, and Anastasia is the only one who witnessed the vicious magical attack.

When she starts having visions and nightmares, she knows she has to act soon or risk losing her friend and haven fashion icon, forever.

igation if she has any chance of getting the wedding back on track and keeping her job.

Unfortunately, this is one wedding crisis that requires more than a strategically placed bobby pin or double-sided sticky tape.

Can there be a fairy tale ending, or will it be Happily Ever Never?