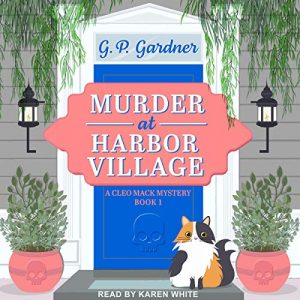 Murder at Harbor Village is the first story in the brand new Cleo Mack Mystery series. The story is wonderfully narrated by Karen White. The tale is shared in the first person POV of Cleo Mack, early retiree from her position as a social work professor in Atlanta, moving to coastal Alabama to be closer to her daughter and family. In a series of odd and fortuitous events, Cleo takes a job at Harbor Village, a community for active seniors and assisted living, a place she’s made friends and would like to live. The first two chapters (1.5 hours) lets listeners get to know Cleo as she explores Fairhope, AL, and makes her decision to retire and move. We see her meet the residents who quickly become her friends. We get to know some of the main players in the story through her eyes. The author does a wonderful job sharing Cleo’s experiences and allowing the reader to learn while enjoying the information.

Soon the mystery takes root. The cooperate head of Harbor Village (Leigh) is found dead in the pool, and rumors run rampant. The woman who hired Cleo, Jamie, leaves the next day with a promotion out of state, leaving Cleo in charge of the entire complex. Then Cleo discovers that her ex, her daughter’s dad Travis, was married to Leigh. She and Travis haven’t spoken in years, but he comes to town, telling Cleo she needs to take over, and find out why the books aren’t right. There are many layers to the story and the author takes time to lay out each one for both Cleo and the listener to digest.

I really enjoyed how the author allows us to see the world as Cleo sees it – providing so much description and attention to the world around Cleo. I appreciate that Cleo thinks about what is going on and processes the information without making assumptions or jumping to conclusions. And what I find unique to this cozy mystery over others I’ve read, Cleo isn’t driven to solve the mystery. Rather, she just wants to fix her new home, Harbor Village, and help the police. She’s smart, but she shares her thoughts rather than holds on to information or theories, and she relies on others to help her. It’s refreshing and enjoyable.

Narration: It’s been a while since I’ve listened to a story narrated by Karen White, but as soon as I heard her familiar voice, I remembered how much I enjoy her work. Her voice for the narrator/Cleo is strong and confident, just like Cleo is written. Ms. White alters her voice for dialogue, adjusting for age, gender, and regional dialect. Her female charters are slightly stronger than her male characters, with the males sounding slightly feminine, but each is distinguishable from the other. I can clearly tell who is talking based solely on their voice. Overall, she performs the story wonderfully, keeping me engaged and interested.

Murder at Harbor Village is a story about Cleo Mack, who just so happens to be tangential to a murder. I really like how we live her life, think her thoughts, and that she’s just an ordinary woman. It’s her life outside the mystery that I’m really enjoying – how she’s turning around Harbor Village and making friends. I cannot wait to find out what is up next for Cleo Mack.

Young retiree Cleo Mack is trading in academia for a second act in Harbor Village, a community for active seniors in coastal Alabama. But someone in this picture-perfect coastal town is burning the candle at both ends . . .

It’s love at first sight when Cleo arrives in Fairhope, Alabama, after taking early retirement from her longtime position as professor of social work. Touted as “the nicest town in the world,” Fairhope is home to an eclectic community of retirees. Harbor Village boasts classes in painting, pottery, and photography, not to mention being a buyer’s market for husbands. It seems an ideal place to make new friends and rediscover life. Until a dead body is found in the pool.

When the victim turns out to be the unpopular director of senior living, Cleo is named acting director. Now she must rely on her well-honed people skills to uncover a killer in a place where short-term memory isn’t what it used to be, and age is just a number. And if Cleo keeps snooping around, her number may soon be up . . .