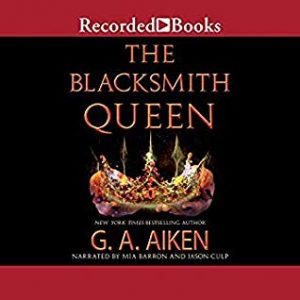 In the beginning… the old king dies and his many sons fight for control of the kingdom. However, the witches send down a prophecy that a farmer’s daughter will become queen. The conniving dowager queen convinces her son (the one most likely to take over the kingdom) to bring the farm girl into the family though marriage; therefore, fulfilling the prophecy.

Keeley Smythe, blacksmith, is the protector of her large family. She is caring and loyal but vicious and violent to any who threaten those she cares about, most of all her family. When it is learned that her younger sister, Beatrix, is going to be the queen, she sets out on a quest with a group of Amichai warriors (centaur shifters) to protect her from harm. However, things aren’t as they appear, and soon, Keeley’s world is twisted sideways and flipped on its end.

The Blacksmith Queen is written in typical G.A. Aiken fashion: huge, dysfunctional, obnoxious families, continuous chaos and name-calling, lots of gore and violence, and a keen sense of humor running through out the tale. Ms. Aiken shifts POVs on the fly and never slows down. Even though I’ve listened to her stories before, it still took me time to get into a rhythm and be able to follow the story.

Keeley’s tale unfolds as a grand quest. She needs help from various factions and goes from place to place, trying to recruit an army. It was entertaining just to follow along and find out what trouble Keeley and her band would find. The group of warriors makes for such entertainment. There is one of her sisters, whom Keeley holds a deep grudge, an ex-professional fighting cousin, and a handful of the Amichai, including her love interest, Caid. (This isn’t a romance, but there is a romantic element to Keeley’s tale.) It’s just pure entertaining listening to the adventure.

Narration: The Blacksmith Queen is shared from MANY different, constantly shifting POVs, and Ms. Barron uses the same female narrator regardless of the POV. She is bold and confident and fitting for the craziness that is G.A. Aiken’s storytelling. The character POV shifts frequently and with little notice and the narrator does a good job of keeping up. At first it was a little confusing, but as I continued to listen, I could pick up on subtle changes that indicated the POV change. Ms. Barron alters each character’s voice for the dialogue, making adjustments based on gender, age, species, etc. Each character has a unique and identifiable speaking voice, even though their narrator voice is the same as all characters. I enjoyed Ms. Barron’s performance; she keeps the tempo and zaniness intact. There is a short male narrated prologue shared by male scribe of the old king. Not at all sure why that was a different narrator. It wasn’t necessary.

I really enjoyed how The Blacksmith Queen ended and the promise of what the future holds. The story is “part 1” in Keely’s tale, and while the story is hers, it’s also the tale of the lands, with the shifting POVs and larger picture of what is happening to the kingdoms. The storytelling is fast and crazy, and all G.A. Aiken. It’s a zany, fun, crude adventure, and I cannot wait for the next story!

The Old King Is Dead

With the demise of the Old King, there’s a prophesy that a queen will ascend to the throne of the Black Hills. Bad news for the king’s sons, who are prepared to defend their birthright against all comers. But for blacksmith Keeley Smythe, war is great for business. Until it looks like the chosen queen will be Beatrix, her younger sister. Now it’s all Keeley can do to protect her family from the enraged royals.

Luckily, Keeley doesn’t have to fight alone. Because thundering to her aid comes a clan of kilt-wearing mountain warriors called the Amichai. Not the most socially adept group, but soldiers have never bothered Keeley, and rough, gruff Caid, actually seems to respect her. A good thing because the fierce warrior will be by her side for a much longer ride than any prophesy ever envisioned …