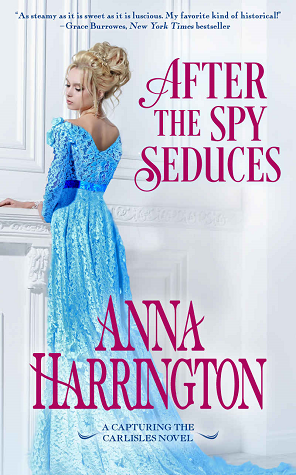 Kit has worked as a spy for the Home Office for a decade, recruited while serving in the military. After ten years, he doesn’t trust anyone and sees darkness and suspicion in everything / one around him. He wants revenge on Garrett Morgan, the man he believes killed his partner and best friend.

Diana Morgan is desperate to save her brother, whom she believes has been kidnapped. She is tricked into delivering secrets to the enemy when she is saved by Kit. In order to protect her, Kit decides to work with Diana to find her brother.

After the Spy Seduces is another enjoyable story in the Capturing the Carlisles series. This time around, there is plenty of intrigue and action as Kit and Diana work together to uncover the truth of what’s become of Garrett. I appreciate that the author allows the pair to reveal secrets and share truths early on, preventing the typical wedge to divide the pair. And major props to Ms. Harrington and her reveal at the midpoint of the book. I never saw it coming, and it was delightful!

The pair spends both high-adrenaline and quiet moments together, keeping them in close proximity and allowing their fondness to grow. They experience a bond neither has felt in the past, but are reluctant to act on anything because of his duty to the Homeland. However, danger and near-death experiences override their internal reservations and allow for a declaration of love.

After the Spy Seduces is an entertaining, romantic romp filled with plenty of action, adventure (spies!), and fun.

As the second son of the Earl of Spalding, Christopher Carlisle appears content to do nothing more than live out his life in gambling hells, wild parties, and widows’ beds. But Kit’s scapegrace existence hides his true calling—as a secret operative who has dedicated his life to crown and country. When his partner is murdered, nothing will distract him from his pursuit of justice…until he meets Diana Morgan. When he discovers the general’s lovely daughter disguised as a boy in a seedy tavern, he’s thrust into a tangled web of lies and deceit that leaves him wondering if anything is as it seems. Especially Diana.

Diana Morgan will do anything to keep her family safe, including risking her own life. So when her missing brother is accused of treason and murder, she’s forced to make a deal with the devil himself—cooperate with Kit in order to find her brother before the French get to him first. Diana must race to prove her brother’s innocence before Kit can send him to the gallows, but as trust grows between them, so does desire. Soon, secrets are revealed that threaten everything Diana holds most dear, and when their lives are placed in peril, she finds herself desperately wanting the one thing she can never have…Kit’s heart.