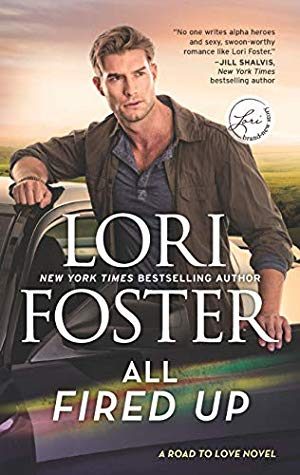 All Fired Up
Author: Lori Foster
Reviewer: Jennifer
Rating: B

All Fired Up is the third book in the Road to Love series by Lori Foster, and I believe it’s the last one, at least it wrapped up nicely to be the last book in the series about the Crews family.

Our heroine, Charlotte has been around since book 1, Driven to Distraction. She is like a little sister to Brodie and Jack, the Crews brothers featured in previous books. She works with them as their spunky office manager.

Charlotte is all business when she is at work and she believes she can apply a business-like attitude to finding someone to date and have a future with. She thinks someone plain and normal like her is what she needs and wants. She knows she’s not going to be with someone like the Crews boys. They are large, loud and always in trouble.

Enter Mitch Crews. The brother no one knew about (well dear old dad knew but he didn’t bother telling them). Mitch is a great guy who spent five years in prison doing something stupid to help his drug-addicted mother. He did not have the same family life growing up as his half brothers did, but he doesn’t have a chip on his shoulder about it.

For me, the best things about All Fired Up is the fact that the secret about Mitch did not drag out, he met his brothers in chapter one and was upfront with them from the being. Another thing I really liked is the fact that Mitch was a good guy despite his crappy childhood and he didn’t want anything from his brothers but to be a part of a family.

The only thing I wish was a little different was the romance between Charlotte seemed to take a back seat to Mitch getting to know his brothers. Not a bad thing really, but I could have used at least a second smoking love scene with them. LOL

All Fired Up wrapped things up with Ros, Brodie and Jack’s mother and their father which I really enjoyed seeing them get a HEA for now. And as always the added characters with the Brute, Mitch’s dog and Howler, Brodie’s dog was fun.

Looking for a slow burn romance between two great people who deserve love in their lives, and a full cast of funny supporting characters try All Fired Up. I think it works best as part of the series so read the previous books to get a full understanding of the secondary characters and their relationships.

Charlotte Parrish has always wanted a certain kind of man: someone responsible, settled, boring. Bad boys need not apply. But when her car leaves her stranded and a mysterious stranger with brooding eyes and a protective streak comes to her rescue, she can’t deny how drawn she is to him. In town searching for family he’s never met, Mitch is everything she never thought she wanted—and suddenly everything she craves.

Finding his half brothers after all these years is more than Mitch Crews has allowed himself to wish for. Finding love never even crossed his mind…until he meets Charlotte. She’s sweet, warmhearted, sexier than she knows—and too damn good for an ex-con like him. But when his past comes back to haunt him, putting Charlotte—and the family he’s come to care for—in danger, Mitch isn’t playing by the rules. He’s already surrendered his heart, but now he’ll risk his life.

Reviews in the Series:
Slow Ride (Road to Love #2)