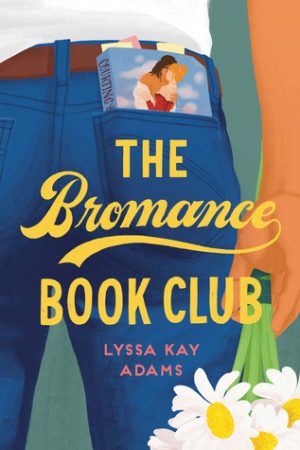 what I’m talking about:

After reading the summary of The Bromance Book Club I was curious to see how the story would be told. Changing POVs or all from the hero’s POV. Adams wrote it with changing POVs, not the chapter changing kind like so many romances in the last few years but scene changes within chapters. There was also an added element of a story within a story with the main character Gavin reading a historical romance titled “Courting the Countess” to get romance tips.

Like in the main story of The Bromance Book Club, the married couple in “Courting the Countess” was having issues in their marriage similar to Gavin and Thea.

The Bromance Book Club was a real treat to read. I love a second chance romance, and I really like them when it’s a married couple working back to an HEA. Add in the comedy of the guys in the book club, and I was laughing so much. To see a group of “alpha” athletes helping each other out with their relationship problems was fun and closed the gap between the sexes. Those men worried about their marriages or relationships as much as the women did. We get to see that with Gavin and Thea first and I’m sure we will see more with other guys in their own books. The group discussions they had and the comments on the romance books/genre were on point!

“So you’re saying I need to d-do w-what the guy in this book does?”

“What the hell is a Regency?”

Gavin’s best friend Del, goes on to explain how it is relevant and then there’s talk about the sex scenes in romances.

“But what does BB stand for?”

Lyssa Kay Adams does a great job of balancing humor, romance and real issues marriage can go through. I felt like both Gavin and Thea’s feelings and thoughts were relatable, and I really cared they worked through their issues to get to the point where they would be a better and stronger couple than they were before.

I highly recommend The Bromance Book Club to romance readers who are looking for a fun and unique read. I cannot wait for the next novel in the Bromance Book Club series, Undercover Bromance. It features Mack, who was a pain in Gavin’s butt, and Liv who is Thea’s younger sister. I just know their story will be just as good if not better.

The first rule of book club:
You don’t talk about book club.

Nashville Legends second baseman Gavin Scott’s marriage is in major league trouble. He’s recently discovered a humiliating secret: his wife Thea has always faked the Big O. When he loses his cool at the revelation, it’s the final straw on their already strained relationship. Thea asks for a divorce, and Gavin realizes he’s let his pride and fear get the better of him.

Welcome to the Bromance Book Club.

Distraught and desperate, Gavin finds help from an unlikely source: a secret romance book club made up of Nashville’s top alpha men. With the help of their current read, a steamy Regency titled Courting the Countess, the guys coach Gavin on saving his marriage. But it’ll take a lot more than flowery words and grand gestures for this hapless Romeo to find his inner hero and win back the trust of his wife.