In modern day Charleston, two fated lovers meet at the beginning of a world-ending witch war

Cyan Burroughs is a lonely light witch prophesied to battle the dreaded Dorcha—a dark sorcerer with the power to rule the world. There’s one problem: Cyan doesn’t have any powers of her own.

An unknown witch flips a trolley and causes mass carnage, and Cyan’s dormant magic awakens. When she drags handsome Irishman Liam Cody from the wreckage, she recognizes his face from her aunt’s psychic portraits. He is the man Cyan is destined to love.

As she and her magical family seek to unveil the murderous witch who caused the accident, Cyan and Liam grow closer, but Liam’s mysterious past is not the only thing keeping them apart.

Dark witches and light will soon fight to the death, and Cyan must face her calling. How can she protect Liam and win the war when her immense powers are barely under control? 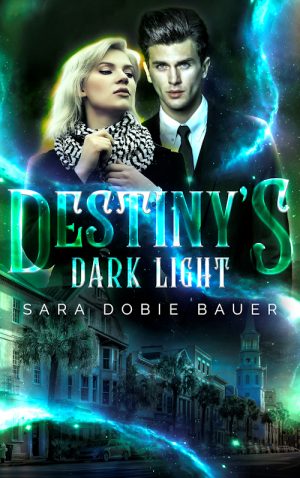 She felt her father’s presence before she saw him and hurriedly returned the picture of Liam to her wallet. Drake seemed to materialize beside her just as her tray of oysters appeared.

He smiled at her with his big teeth—Drake Burroughs was big everywhere—and took a seat with a stack of paper in his huge hands. Familiar with the family, the bartender brought over a Coast IPA and placed it in front of Cyan’s father.

“Did you get what we needed?” She squeezed a lemon over the slimy creatures in their silver shells.

“Do I ever disappoint?” He tugged a piece of her hair, which made her glare. “A full list of everyone on the trolley at the time of the attack and the names of who lived, who died.”

“Do you recognize any of the names?”

“Nothing I noticed. No ancient Craft family names, no.” He took a Drake-sized sip of beer, which was a normal man’s gulp. “Most of the victims were tourists.”

“Okay.” She poured a salty oyster into her mouth, using its shell as a serving spoon. “Maybe we should only focus on the people who aren’t tourists?”

“It’s possible the witch who did this traveled to get his victim, followed him or her here, but why attack someone on their vacation?”

Drake frowned. “People put their guard down on vacation.”

“So maybe we only look at tourists?”

“I think we look at everyone on this list. We also have to consider that if the dark witch was successful in his attack, if his intended target is indeed dead, then he’s probably long gone.”

She added some Tabasco and swallowed another treat. “And therefore not our problem.”

“The power it takes to flip a trolley? That’s a lot of power, little girl.”

Cyan shook her Bloody Mary glass until the ice danced. “I know you think it could be the Dorcha. So isn’t there, like, a database of people with one blue eye and one green?”

“You’re referring to the Book of Shadows prophecy.”

“Yes.” She slapped the heavy wooden bar in irritation. “The only clue we have about the Dorcha: they will have one green eye and one blue eye—and their lifetime will coincide with mine as Loach.”

Drake shook his head. “There isn’t a database, no, but be sure to look closely at people’s eyes, huh?” He paused. “Then again, a powerful witch aware of the prophecy would cast their eyes to match.”

“Yeah, f*cking fantastic. Daddy, if whoever caused the accident was the Dorcha, why aren’t I shooting lightning out of my fingers yet?”

He chuckled. “It might not start immediately, and it could start small. When you reach for a spoon, maybe it shakes before you touch it. Maybe try some incantations and see if anything happens.”

She ate another oyster. “I’m done talking about this right now.”

“I know you’re frustrated by your lack of ability, but it’ll come.”

“Yeah, great, just in time for me to have to kill someone.”