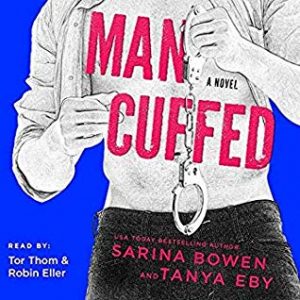 After loving the first three titles in the Man Hands series, I couldn’t wait to give a listen to Man Cuffed. Taking place in the same world, it is loosely related to the series because main character Meg is the sister of Sadie (book 3 heroine). While I struggled with the book early on, I ended up enjoying it quite a lot.

Meg, an aspiring actress, recently moved back to Michigan to be near Sadie, and moves into an apartment next to the hot cop she mistook for a stripper six months previously. When she finds out the Mac’s girlfriend is cheating on him, Meg makes it her mission to bring her down. I felt her drive to bring down this woman she’d never met was a bit too over the top and frankly, on the psychotic side of things. Instead of just telling Mac, she tries to plant evidence of other men in his apartment. It started a little funny, but then got out of control. However, when she’s caught breaking into his place, Mac insists she must come as a date with him to his sister’s wedding as payback.

Mac has a lot of baggage that keeps him a confirmed bachelor and firmly out of romantic relationships. However, as Meg and Mac start spending more and more time together, a friendship develops, fueling their mutual attraction. He doesn’t want to have sex with her because he’s worried he’ll want more, and then he’ll have to move. Once the pair gives in and starts sleeping together, we know that Meg is hoping for more than a friends-with-benefits arrangement, which broke my heart because she’s well aware Mac doesn’t want more.

Mac and Meg are so perfect for one another. I loved their banter and how they slowly grow. Meg learns more about herself and what she wants out of life and Mac learns to forgive and love again.

Narration: The book is shared in the alternating POVs of Meg and Mac. At the start of the book, I found that I was not a huge fan of Ms. Eller. At times her speech was over pronounced, and at one point Meg used her acting skills to fake a British accent that was not very good. However, after a few chapters, I grew into her role as Meg and felt her performance was fitting to the crazy, drama queen Meg. Mr. Thom had a pleasant voice that was deep, but not overly so. Both narrators did a good job differentiating between characters, with fitting voices for both genders.

While things started on the shaky side, I ended up really enjoying Man Cuffed. I love how Meg and Mac’s relationship just evolved overtime and even though she wanted more, she never expected it – never forced it and walked away when she was told it wouldn’t happen. They are fun, funny, and sexy.

A good cop can always spot trouble. That’s why my senses started pinging the moment I met the hottie next door. The neighborhood may never be the same. First she confuses me for a male stripper and tries to remove my uniform. (The guys on the force will never let me live that down.) And then there’s the breaking and entering.

I don’t know what to do with her. My libido has a few ideas of its own, though. Bad, bad ideas.

Hey, it’s not my fault that Hot Cop’s nightstick gets excited every time we see each other. And I can’t help that someone broke into his apartment.

Fine—that last thing was totally my fault. And I intend to make amends. So when he needs a date for his sister’s wedding, I’m there. This is right up my alley. I’m an actor. By the time it’s over, his entire family will believe we’re a couple.