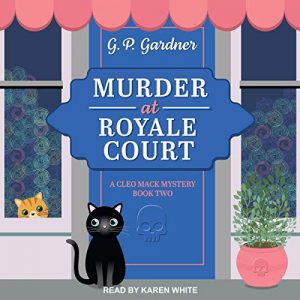 Murder at Royale Court is the second story in the Cleo Mack Mystery series. I am happy to report it is equally as entertaining as its predecessor. The tale is shared in the first person POV of Cleo Mack, early retiree from her position as a social work professor in Atlanta, moving to coastal Alabama to be closer to her daughter and family. Four months into her position as director of Harbor Village, Cleo is more comfortable in her new job and is in a good place emotionally and mentally. We are brought up to speed on some of the big changes she’s instituted at Harbor Village, and we continue to follow her along as she works out how to improve things for residents. The author does a wonderful job sharing Cleo’s experiences and allowing the reader to learn while enjoying the information.

This time around, Cleo and close friend Nita, find a dead body while watching over the local knit shop as a favor to Anne. The timing is coincidental to the first ever Fairhope Automobile Show, which is the center of the entire community’s focus. There are new faces brought in because of the show, and returning residents and friends who support Cleo, including a small romantic side story. Once again, I appreciate how Cleo doesn’t see it as her job to figure out who the murderer is, but rather she helps the police because she can. The mystery is complex, but not confusing or overdone. It unfolds slowly as peripheral actions and events all start to fit together.

I really enjoyed how the author allows us to see the world as Cleo sees it – providing so much description and attention to the world around Cleo. I appreciate that Cleo thinks about what is going on and processes the information without making assumptions or jumping to conclusions. She’s smart, but she shares her thoughts rather than holds on to information or theories, and she relies on others to help her. It’s refreshing and enjoyable.

Narration: Karen White continues to bring life to Cleo. Her voice for the narrator/Cleo is strong and confident, just like Cleo is written. Ms. White alters her voice for dialogue, adjusting for age, gender, and regional dialect. Her female charters are slightly stronger than her male characters, with each being distinguishable from the other. I can clearly tell who is talking based solely on their voice. Overall, she performs the story wonderfully, keeping me engaged and interested.

Murder at Royale Court is another great mystery and story. I feel like an honorary member of Harbor Village. I love the little details of Cleo’s life. It’s her life outside the mystery that I’m most enjoying – how she’s turning around Harbor Village and making friends.

Harbor Village is a vivacious retirement paradise known for its beachy locale and active senior scene. But ever since murder moved in, the idyllic coastal community is becoming a little less lively . . .

With the first annual antique car show cruising into the tranquil bayside oasis of Fairhope, Alabama, there are bumpy roads ahead for Harbor Village director Cleo Mack. As an automobile-themed lecture series gets off to a rough start, she finds herself balancing one too many responsibilities—and dodging advances from a shady event sponsor. It’s enough to make Cleo feel twice her age. But the festivities reach a real dead end when she discovers a body at the Royale Court shopping center . . .

When an innocent man lands in the hot seat for murder, Harbor Village residents look to Cleo to crack the case. Aided by an eclectic group of energetic seniors, Cleo races to identify the true culprit from a growing list of harmless Sunday drivers—before a killer revs up for another hit and run!