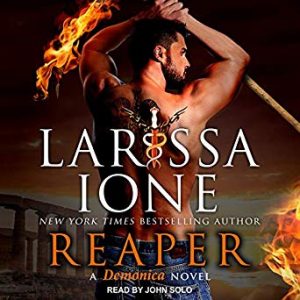 When I heard that Reaper is the final book of the Demonica World, I knew I had to read it, so I jumped at the chance to review the audiobook (I’ve only read the books before this). Reaper is the culmination of the Demonica Underworld story arc featuring the various players of, well… the Underworld. And while Azagoth had a novella with HEA/FN earlier in the series, his roll as the Grim Reaper is central to the upheaval that is occurring in the Underworld. This story is much more than a romance – it is the climactic conclusion of one of the best paranormal romance series, and Ms. Ione does not let her characters go quietly into the night.

Overall, I liked how Ms. Ione closed out the Demonica/Underworld series. I enjoyed seeing all my favorite characters from over the years – although I had trouble remember some of them. I didn’t read the most recent (previous) novella, and while it was “okay,” it was clear that events that happened in that book (Cipher) directly impacted this story. Additionally, I had trouble really remembering what had happened in the individual books leading up to this, which hampered my enjoyment a little. However, the author does a very good job helping readers like me who may have missed a book or two, or forgotten what happened.

The story is long and layered, but boils down to bad vs really bad (I would say good vs evil, but let’s face it, Azagoth is not “good”). It is about Azagoth finding his place in the grand scheme – he was more than done with his life as is and the restrictions place on him by Heaven. There are many moving parts and side issues, like a traitor within Azagoth’s camp, Revenant’s captivity, the asshole angels, and the death of a well loved character. Some of the storylines worked well for me, but others not so much. Specifically the betrayer – I felt like the author placed a few red herrings, but then the actual betrayer came from out of the blue with a bizarre twist for the reason. That disappointed me.

Narration: At first I thought I’d heard this narrator before, but then I realized he just really reminded me of Jeffrey Kafer, whom I enjoy. Mr. Solo has a deep voice, but he is able to achieve soft and light, with a wide range of voices for both males and females: from powerful to cowardice, from harsh to sultry. He varies the dialogue for each character. Some didn’t fit what I imagined them to be, but he does a good job making each voice unique and trying to match the persona, gender, upbringing, and breed. My only real issue was that he is very melodramatic, with emphasis and pauses, from time to time. It reminded me of Captain Kirk spoofs. However, I guess it fits the characters and over-the-top personalities and actions of the series.

In the end, I’m glad I took the time to listen to this final Demonica book. Reaper is one for fans of the series, and I enjoyed the ride.

He is the Keeper of Souls. Judge, jury, and executioner. He is death personified.

He is the Grim Reaper.

A fallen angel who commands the respect of both Heaven and Hell, Azagoth has presided over his own underworld realm for thousands of years. As the overlord of evil souls, he maintains balance crucial to the existence of life on Earth and beyond. But as all the realms gear up for the prophesied End of Days, the ties that bind him to Sheoul-gra have begun to chafe.

Now, with his beloved mate and unborn child the target of an ancient enemy, Azagoth will stop at nothing to save them, even if it means breaking blood oaths and shattering age-old alliances.