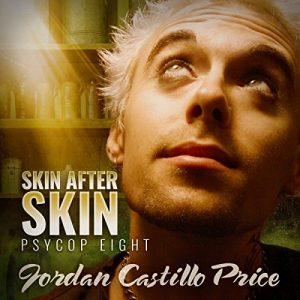 Being a fan of the PsyCop series, and the audiobooks, in particular, I was extremely happy to receive this copy of Skin After Skin in a giveaway from the author. Though Crash’s presence in the previous stories is limited, his effect on the other characters is undeniable, and his reactions were so unexpected sometimes that I had no trouble believing there was much more to him than was immediately apparent. I also thoroughly enjoyed Crash’s appearance in several “extras” posted by the author, which gave additional insight into Crash’s point of view.

One thing about Skin After Skin that I really appreciated was that we get to witness Crash’s journey from disdainful skeptic to confidant and guide. Unlike many stories that feature formerly secondary characters, Skin After Skin delves deeply into Crash’s recent past as it merges into a more familiar present, rather than just skimming over his backstory, although we see pieces of that, as well. He changes a lot throughout the narrative, and I found it rewarding to consider whether his empathic gifts evolved so quickly as a result of the path his life takes during this time or the other way around.

Another welcome aspect of this audiobook was the return of Gomez Pugh as narrator. Mr. Pugh has always struck me as the perfect voice for Victor, though he shifted into any number of other characters with seemingly little effort, including Crash. I wasn’t sure how Crash’s would hold up as the main character the entire time, but Mr. Pugh managed to retain his personality chapter after chapter, even if it may have seemed understandably mellowed by the end. Still, I can’t deny the pang of fondness I felt whenever Victor entered a scene.

In the end, I think Skin After Skin is a fine addition to the PsyCop series. I’ve always liked Crash, despite feeling that he was just out of reach, and I believe that Mr. Pugh’s ability to keep Crash’s voice distinct helped with the changes his POV made in some of my beliefs about the other characters. Through loss and eventual self-acceptance Crash’s life metamorphosed into a transcendent—if somewhat elusive—purpose that suited him. And while I’m excited to jump into the next title in the series, I’m very grateful to have been able to explore this perspective, too.

My Ratings
Story: B+
Narrator: A
Overall: A-

Fierce. Audacious. Independent. Curtis Ash can’t be bothered to settle down. He’s too busy enjoying his cushy job as a high-paid stylist, caught in a whirlwind of hookups, parties, and obscenely priced cocktails.

The only snarl in an otherwise charmed life is the salon’s hotshot colorist, Red Turner. Not only does Red put the whammy on customers and rake in all the big tips, he’s oblivious to Crash’s flirtation. But there will be plenty of time to win him over – or so Crash thinks.

Thanks to his refusal to trust his gut, Crash not only tanks his career – he allows the one man who truly holds his interest to slip away. While he insists he doesn’t need a relationship to complete him, would sharing his life with someone really be so bad?

Skin After Skin is a sweeping saga that begins two years before Among the Living and ends just after Spook Squad. Experience PsyCop like you’ve never seen it before, through Crash’s eyes. Discover new facets of characters and events from the span of the entire series and beyond, all from the viewpoint of an extroverted empath.