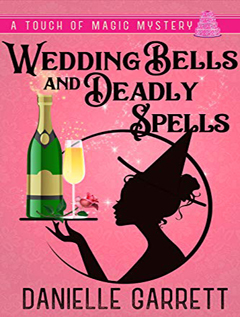 Picking up roughly six months after the conclusion of the previous book, Wedding Bells and Deadly Spells brings listeners up to speed on magical wedding planner Anastasia Winters. Dealing with a nightmarish, but rich and powerful, “groomzilla,” Ana does her best to keep calm waters, even planning a celebratory dinner with friends after the wedding is over. However, she doesn’t make it that far because the groom drops dead before he can say “I do,” and once again her boss blames Ana for the problems and negative publicity.

Like its predecessors, Wedding Bells and Deadly Spells is a cozy paranormal mystery at its center. Ana takes a more active roll this time around, which does put her at odds with her SPA boyfriend, who is in charge of the case. I appreciated that even though she did some snooping of her own, she is upfront with Kaleb, keeping him in the loop. The mystery was entertaining, but not quite as involving as the previous two books. Part of this is because the mystery is solved three-quarters of the way into the book, with the remaining quarter dedicated to Ana’s personal growth and development.

I’m not sure if this is the final book in the series, but it had an air of finality, leaving Ana in a very good place, complete with her HEA. Original series (Beechwood Harbor) sleuth, Holly Bolt makes an appearance in Wedding Bells and Deadly Spells. This ends up impacting Ana’s life via Harmony, her sister, who has been living with Ana for the past year plus. Based on what happened in this one, I anticipate we will be seeing Harmony, along with another Touch of Magic regular, in Holly’s series.

Narration: Amanda Ronconi continues to work her own magic with Ms. Garrett’s series, once again turning in a wonderful performance. The Touch of Magic Mysteries is voiced from the first person POV of Anastasia. Ms. Ronconi gives Ana a solid presence, making her unique and identifiable. She provides enough differences between character voices to make each distinguishable from the next. Her male voices are generally deeper and fitting and familiar if you’d listened to the other series. However the characters and setting/story are different enough not to cause confusion when listening.

Whether or not this is the final Touch of Magic Mystery, I really like Ana, and I am glad to see her so happy in the end. This is a fun series – good mysteries, and I just adore the main characters. Here’s hoping we see more of Ana in the days to come.

A drop of poison is all it takes to bring the biggest wedding of the season to its knees.

Anastasia Winters adheres to the adage that the show must go on, but when the groom of her latest wedding drops dead before “I do,” she’s left with no backup plan.

Things get even stickier when her friend and esteemed caterer, Francois, is named the top suspect.

Ana’s loyalties are tested as the investigation turns into a vicious tug-of-war. She believes Francois is innocent, but holding the other side of the rope is the lead detective–her serious boyfriend–and the more she struggles, the more her own chance at happily ever after starts to unravel.

It’s up to Anastasia to find the killer, while gripping tightly to her relationships before they break and leave her with nothing.