Today we celebrate the release of

A Madness of Sunshine
by Nalini Singh 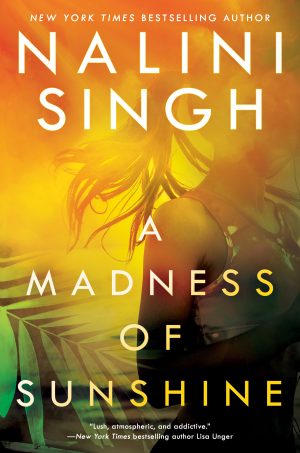 The sun’s rays broke completely through the last of the mist as they rose into the air. Will glimpsed a small and curvy woman with blonde-streaked brown hair on the verandah of the estate house, her elegantly boned face lifted to watch the chopper and her hands gripping the railing. She was wearing a red negligee and, despite their distance from the house, the wind from the chopper blades pasted the silk and lace of it against her body, outlining a shape that had driven many a man to his knees.

Then the chopper was up and at an angle that made it impossible to see Keira May any longer. Dismissing Daniel’s wife and Nikau’s obsession, Will raised the binoculars to his eyes and began to scan the landscape. It looked even more unforgiving from up here. Serrated black rocks that thrust up from the sand in huge broken shards, foaming water that took no prisoners, and a wilderness so tangled and thick that it was difficult to see beneath the canopy.

Daniel went down low without prompting, low enough to give Will the best possible chance of spotting a woman lying injured below. The one thing in their favor was Miriama’s bright choice of running gear.

“Did you try on the other side of the whirlpool?”

Will didn’t look away from the trees below, intent on spotting even a hint of hot pink or orange. “What’s on the other side of the whirlpool?”

“A kind of cave formed by the way the rocks fell there,” the other man said, his voice echoing through the headphones. “We used to hang out in it as teenagers—it’s safe at low tide.”

Daniel angled the chopper back over a particularly dense patch of trees so Will could take a second look. “There’s a running trail right above the cave that hardly anyone uses. It was totally overgrown the last time I overflew it, but Miriama likes to run and she’s good at it. Maybe she went there—it’s definitely a more challenging track.”

Will calculated how long Miriama would’ve had to run to get to that spot, knew it was far too long, but they had to check every possible option. Could be she’d been enjoying the run so much she’d gone far beyond her normal distance. “Let’s go.”

From above, the whirlpool looked like the mouth of hell, spilling and crashing and so dark that it felt as if its depths went on forever. Bones cold with the knowledge that if Miriama had fallen anywhere near the dangerous spot, she was gone, Will continued to scan through the binoculars.

But if he hadn’t known to look for the rock formation that formed a cave, he’d have missed it, it was so well camouflaged to match the neighboring rocks. A second later, he realized Daniel wasn’t the only one who’d thought of the spot. A male body stood in front of the stone archway, one hand on the rock.

Though he looked up at the sound of the chopper, Nikau didn’t wave. Instead, he ducked under the stone to disappear inside. “We should focus on the cliffs above,” Will said to Daniel. “Nikau can check out the cave.”

Fine lines bracketing his mouth, Daniel didn’t argue for once. They skimmed along the top edge of the cliffs back to the other side of the whirlpool and, while most of it was tangled growth that hadn’t been disturbed for years, Will did spot what might’ve been a disturbance in one small section. Using his phone, he asked one of the nearby searchers to have a look.

“Definite signs someone stood or walked through here,” the man confirmed. “But it’s not churned up like if Miriama went over the edge.” A small pause. “Almost as if a pig hunter maybe walked out of the trees behind me and came to stand here, look at the view.”

Hanging up, Will considered the cave again and frowned. That cave was exactly the kind of secretive and private spot teenagers loved. It should’ve passed from teenage group to teenage group in a town like this, but for whatever reason, it had been abandoned. Forgotten.

On the rugged West Coast of New Zealand, Golden Cove is more than just a town where people live. The adults are more than neighbors; the children, more than schoolmates.

That is until one fateful summer—and several vanished bodies—shatters the trust holding Golden Cove together. All that’s left are whispers behind closed doors, broken friendships, and a silent agreement not to look back. But they can’t run from the past forever.

Eight years later, a beautiful young woman disappears without a trace, and the residents of Golden Cove wonder if their home shelters something far more dangerous than an unforgiving landscape.

It’s not long before the dark past collides with the haunting present and deadly secrets come to light. 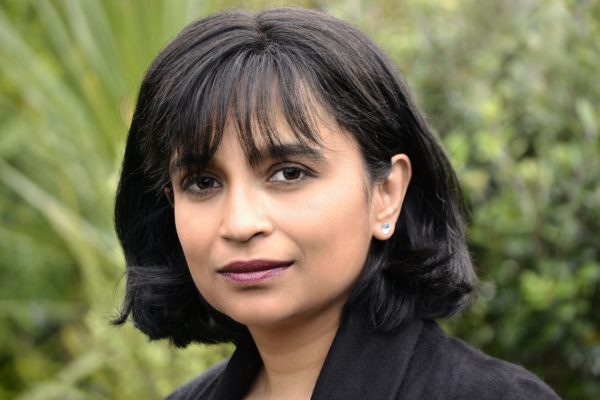 Nalini was born in Fiji and raised in New Zealand. She spent three years living and working in Japan, where she took the chance to travel around Asia. She’s back in New Zealand now, but she’s always plotting new trips. If you’d like to see some of her travel snapshots, have a look at her Travel Diary page.

She’s worked as a lawyer, a librarian, a candy factory general hand, a bank temp and an English teacher, but not necessarily in that order. Some might call that inconsistency, but she calls it grist for the writer’s mill.

Nalini has been writing for as long as she can remember. All of her stories held a thread of romance, even when she was writing about a prince who could shoot lasers out of his eyes. Creating unique characters and giving them happy endings is her favorite thing. She even loves the voices in her head, so there’s no other job she’d rather be doing. When she got the call in September 2002 that Silhouette Desire wanted to buy her first book, Desert Warrior, it was a dream come true. Nalini hopes to continue living the dream until she keels over of old age on her keyboard.