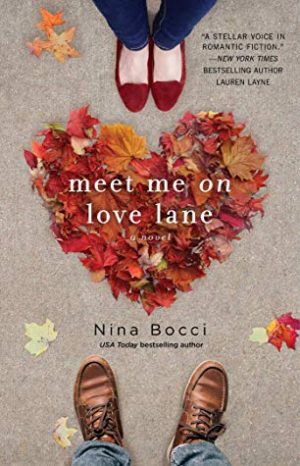 Meet Me on Love Lane is the second book in Nina Bocci’s Hopeless Romantics series, and it features Henry. I enjoyed meeting Henry in the first book, On the Corner of Love and Hate and looked forward to seeing more of him.

The setting for the series is a small town in upstate New York called Hope Lake. It’s just a few hours away from New York City. The heroine, Charlotte finds herself returning to the town after being away for twenty-one years. Her parents got divorced when she was ten and her mother kept her away from the town and the people in it.

Charlotte’s dad and grandmother, Gigi did their best to get custody of her when she was young, but because her father was a doctor who traveled on mission trips for long periods of time the judge ruled in favor of the mother. Rose, Charlotte’s mother was not the best mother. She has tons of issues and bad mouthed the town of Hope Lake to Charlotte while she was growing up. Effectively making Charlotte not want to go back to her hometown.

After Rose passing away and then a couple of years later Charlotte losing her job in NYC, Charlotte needed a break from the city to regroup and figure out her future. She decides to go to Hope Lake just for the summer to work and save money then return to NYC.

Once she enters Hope Lake, one funny thing after another happens, and she is thrown back into the childhood home that she doesn’t remember. She has repressed memories of her time in Hope Lake, forgetting her group of friends, well all but one, Emma (the heroine of the first book). She only remembers Emma because they stayed in touch and saw each other during their college years.

Meet Me on Love Lane is light on romance, but there is one with her long lost best friend, Henry. Because of Charlotte’s memory issues, she doesn’t remember Henry along with Nick. But she slowing starts remembering the group as friends when she started learning more about the time and have a few cases of déjà vu.

There’s a small set up of a possible love triangle between Charlotte, Dr. Max, a young doctor new to town who is working with Charlotte’s father, and Henry. But don’t worry, Dr. Max can’t compete with Henry and the romance quickly focuses more on Henry as the love interest.

Meet Me on Love Lane is an enjoyable read about a thirty-one-year woman reconnecting with her family and friends and figuring out what she wants out of life. It’s funny and sweet. I read it in one sitting and I rarely do.

I look forward to going back to Hope Lake for the next book, which I’m hoping will feature Nick and possibly Charlotte’s friend from NYC, Parker.

Charlotte Bishop is out of options in New York City. Fired, broke, and blacklisted by her former boss, she’s forced to return to her hometown of Hope Lake, PA to lick her wounds. Although she’s expecting to find a miserable place with nothing to do, she is pleasantly surprised to discover it is bustling and thriving.

With a heart torn between two men and two cities, what’s a girl to do?

Reviews in the Series:
On the Cover of Love and Hate (Hopeless Romantics #1)