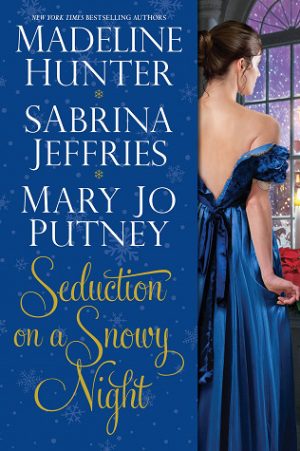 Seduction on a Snowy Night is a historical romance anthology, with three stories set around the Christmas holiday.

Adam Prescott, the Baron Thornhill, is on his way to his cousin’s home for the holidays, but before he can make it, he is kidnapped. Once Adam realizes who has kidnapped him, he thinks it’s because his cousin cheated the family in a matter of horseflesh. However, Caro’s motives are for a more personal nature, and she’s determined to have Adam comply with her demands.

Adam and Caro are forced into close proximity for several days and a mutual attraction grows to friendship and admiration. I loved how earnest Adam is; such a gentleman, and he loves Caro. It was pretty obvious how things would go down, but it was still a joy to read. Overall, I really liked this story. My Rating: B+

Cass is trying to find a love match for her younger cousin, Kitty, who has a rather large dowry. Meanwhile, Cass hides her own inheritance because she was hurt by a man who only wanted her for her dowry. Lord Heywood Wolfe is a friend of Kitty’s brother, Douglas. He promised Douglas that he’d prevent Captain Malet from marrying Kitty, meanwhile Douglas gave Heywood his blessing to marry his sister.

I specifically picked up this anthology because of Ms. Jeffries story (I greatly enjoyed the first book in the series.) I did like the premise and set up; I enjoyed how Heywood and Cass figure out the truths of one another. However, I felt the penultimate conflict was a bit over-dramatic with Heywood blowing things out of proportion. However, the story ended how it should, and overall, it was a good read. My Rating: B

This is a second chance romance between Lady Diana Lawerence, who has lived abroad over several years, and Anthony Raines, the Duke of Castleton. She left him abruptly after he proposed seven years ago.

This one was okay – it had a lot of promise, and I enjoyed the premise, but it was a bit hokey at times. He kidnaps her cat to get her to come to him. But I liked the second chance aspect. My Rating: B-

Overall, Seduction on a Snowy Night is a fun, sweet, entertaining historical anthology. I enjoyed the stories, which are centered on the winter/holiday season.

Caroline Dunham has a bone to pick with notorious rake Baron Thornhill—and a creative plan to insure his undivided attention. Yet once in close quarters, she finds herself beholden to their smoldering connection.

Whisked away from a wintry ball by a commanding colonel, Cassandra Isles struggles with her feelings for Lord Heywood. For he is a man sworn to marry only for money—and Cass is an heiress who will accept nothing less than love.

Dressed as a veiled princess, Lady Diana Lawrence is shocked to discover that the mysterious corsair who tempts her away from the costume ball is the duke she once loved and lost. Now ensconced with Castleton at a remote lodge, will she surrender to the passion still burning hotly between them?