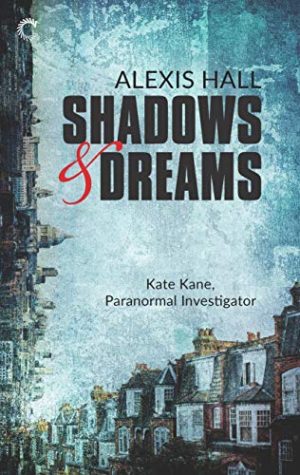 After having so much fun with the re-release of Iron & Velvet, I was fairly confident I’d enjoy the second novel in the Kate Kane, Paranormal Investigator just as well. And I did. This time around, Shadows & Dreams was as delightfully incongruous and enjoyable as before, with the added benefit of familiarity and a lingering fondness.

Once again, Kate somehow manages to wind up in the role of both sleuth and unenthusiastic savior in a world on the brink of annihilation when an almost hook-up hires her to track down her missing brother. Naturally, pandemonium and several near-death confrontations follow, but all Kate really wants is some quality time with her girlfriend. Unfortunately, things don’t quite work out that way, given that most of the other parties involved are either actively trying to kill her, possess her in order to slaughter everyone in sight, or use her in their deification ritual. Typical Kate stuff.

‘Yet still the most normal person you’ve dated this century.’

She had a point.”

One of the things I like most about Mr. Hall’s writing is his ability to consistently write characters that I end up caring for a great deal. While Kate is still my favorite in this series, several others in Shadows & Dreams left their mark as well. Julian was a riot, as expected. Nimue was more fascinating than before, her power unexpectedly impressive for how casually she wields it. I also liked getting to know Eve (another of Kate’s exes) better, and found Elise (Kate’s living-statue-flat mate) completely wonderful. Kate’s frequent interactions with her former girlfriends could have been problematic, but watching her lingering frustrations with them give way to a mildly sparkling kind of nostalgia was actually very sweet.

“There’s no such thing as an ordinary girl.”

In addition to being a satisfying mystery, Shadows & Dreams was simply good entertainment for me. Despite near-death scenarios (largely due to the lethality of the company she keeps), this is a fun series. I love that Kate is always tired and that she can’t stop doing the things she knows she’d be better off not doing. She engenders loyalty in others that even she doesn’t seem to understand most of the time, and she’s fully aware that her best intentions might get someone—or her—killed. But, she can’t not try.

Once again, Mr. Hall has created a world of tantalizing impossibility and a hero unlike any other I’ve read. Shadows & Dreams is proof that Kate is a mess sometimes, but I think it’s a lovely mess. Though I haven’t gotten the paperbacks yet, the new covers are beautiful, and I’m determined to have them for my favorite bookshelf soon. I’m also super excited for the third story in the series, Fire & Water, which is due to be out next year.

The two parts of being a paranormal private investigator I could really do without are being forced to eat bananas by an animated statue with a potassium fixation, and being put on trial for murder by a self-appointed council of vampire oligarchs.

To be fair, I did kind of do it (the murder, not the bananas). But I was kind of saving my girlfriend, who is kind of one of them.

On top of this, I’ve also wound up with a primordial queen of the damned trying to strangle me in my dreams. And the conspiracy of undead wizards who tried to sacrifice me fifteen years ago has decided that now is the best possible time to give it another go.

Throw in the woman who left me for a tech start-up, the old girlfriend who I might sort of owe eternal mystical fealty to and a werewolf “it girl” who can’t decide if she wants to eat me in the good way or the bad way, and I’m beginning to think life would be easier if I made better choices. Then again, it’d be a whole lot less fun.