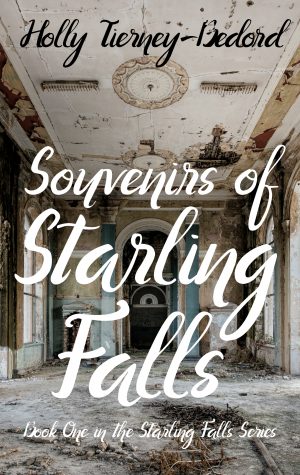 On our first night at 313 Hawthorne Avenue, a muggy, cricket song-filled evening in July, two strangers paid us a visit at nearly ten o’clock. We’d been talking quietly, our backs to the street, and we didn’t notice them until they were making their way up our porch steps.

He wore knee-length jean shorts and a t-shirt displaying the Starling Falls High School beaver mascot. Beneath our dim, yellow porch light, the part of his narrow face not in shadow from the brim of his cap gleamed with the persistent waxy pockmarks left over from his youth. He had a perfectly oval-shaped goatee, the likes of which I hadn’t seen in years, and the teeth of an eager rodent.

She was beautiful and elegant, and, as far as first impressions go, seemed not to be his fitting counterpart in any way. She wore a long kaftan and flat, barely-there sandals. Her straw-yellow hair was twisted back and fixed in place with a single chopstick. She was carrying a pie.

Tom and I were taking a break from unpacking, having some beers, and my initial feeling upon seeing these poorly matched strangers approaching with that pie was that I wanted to slip inside the house and hide. Instead we stood up and met them, naturally, as civilized people do. Up until this moment, I’d only been a city girl. An anonymous face in the crowd that didn’t bother with niceties or masks. But I’m so adaptable, it turns out, that my face instinctively formed an appropriately benign small-town smile. The kind of smile I would come to constantly wear.

“Hello, new neighbors,” said the man. “Barnaby McGhee. Tampa Bay Buccaneers fan, hence, the hat,” he added, tapping the red cap on his head. “Not that I’ve been to Florida more than three or four times in my life.” He laughed. His voice was nasally. I recognized it as originating from some vague, flat part of the Midwest. He held out his hand to Tom, and then gave him the heartiest, most vigorous handshake I’d ever seen.

“I’m Tom Shaw,” said my husband, “and this is my wife Courtney.” I nodded and smiled some more. A headache had been coming on for hours and this unexpected visit was making it crest.

After the handshake, Tom wiped at his dirty forehead, pushing his sweaty hair from his eyes, and then picked up his bottle of beer he’d set on the porch railing and took another drink from it. We’d been moving furniture and boxes all day. I knew he wasn’t in the mood for meetings and pleasantries either. “I’m afraid I’m not a huge sports fan,” he said.

“I’m Priscilla,” said the woman, holding the pie out in front of her chest like a ballet dancer who’d been frozen mid-spin. Though she was simply standing before us, there was compressed excitement just about bursting from her. Her nostrils flared a bit, her eyes and breath both seemed to be quivering with an undercurrent of electricity.

“Oh, this?” Priscilla shrugged daintily, her shoulders rising and falling with a slight, flirtatious nudge. “We thought we’d bring you a little housewarming present.” She handed me the pie, and everything that came with it: four china plates and four linen napkins, all of which I hadn’t initially noticed since the pie had been resting on top of them.

“How unbelievably kind of you,” I said, carefully setting the stack of steaming-hot hospitality on the wicker table on our porch. Wisps of sweet banana-scented heat wafted from its tiny puncture wounds. Hot banana pie. On the face of the pie, I now saw that in blocky letters made of more pie crust, fanning out like a rainbow, were the letters W E L C O M E    F R I E N D S.

Priscilla removed four forks from the pocket of her kaftan and set them on the dirty wicker table beside the pie and plates. Then she reached back into her pocket and produced a huge knife, wrapped in another linen napkin. Carefully, expertly, like a surgeon, but with the flair of someone who lived to be observed, she sliced the pie, avoiding every letter of her welcome message like a champ. Then she wiped off the blade with the napkin and tucked the knife and napkin back into her pocket. She sighed and smiled expectantly.

The kaftan. It looked like it was homemade, but of designer fabric. Not like the homemade clothes I had to wear when I was growing up. It was the creation a bored person would make when she was out of normal things to do.

“We thought you probably didn’t have any dishes or cutlery unpacked yet,” she explained, sighing and smiling expectantly again.

“Thank you. Please sit down,” I added, since I had no other real option.

“Thanks,” they said. They made themselves comfortable on the porch swing and we brought the wicker table and chairs over beside them. Priscilla began dishing up the pie. Tom took two more beers from the cooler, opened them, and set them on the table.

“So, what brings the two of you to Starling Falls?” asked Barnaby. “You bought this place, right?” I guess he meant as opposed to renting it.

“I’m a writer,” said Tom, “and Courtney likes old houses. We thought this looked like a good place to start our life.” I smiled and squeezed Tom’s hand, not at all ashamed of our romantic aspirations. I’d soon discover that everyone who moved to Starling Falls came with similarly simplistic yet lofty intentions. The locals, I’d learn, were a different story. They didn’t aspire to romanticisms and remarkability. Those who aspired, aspired to leave. Their stories were predictable and heavy. Unmentioned. Unmentionable.

“What about you two? Are you from Starling Falls originally?” Tom asked them.

“We’re from Tulsa,” Barnaby continued. “For the past nine years, that is. I grew up in Springfield, Missouri. Priscilla’s from St. Louis. I’m the new director of the Wayward Academy. I just finished up my first week there.”

“What’s the Wayward Academy?” I asked, feigning polite interest. In my peripheral vision, Tom was taking a bite of banana pie and trying not to gag.

“Do you want a little cream on it?” Priscilla murmured to Tom. Though I hadn’t detected the slightest bulk to her, she pulled a can of Reddi-wip from yet another fold of her kaftan and splurted a raspy, hissing plume of it onto Tom’s pie.

“Thanks,” he said, wiping some rogue splatters off his face.

“Sorry about that. I got a little messy, I guess.” She smiled from under her long eyelashes at my husband. I felt my mouth twist in annoyance. “Anyone else want some cream?” she asked quietly to no one in particular, before tucking the can back into her pocket.

From the author of Kindle Unlimited All-Star winner Sweet Hollow Women comes a dark ghost story series about the secrets buried in a beautiful mountain town.

My name is Courtney Shaw. I was twenty-six and my husband Tom was about to turn thirty that summer in 2007 when we moved to Starling Falls, Idaho. Our hearts were full of hope and love. We couldn’t believe our good fortune in finding such a beautiful old mansion to call our own. We thought we’d grow old there in Starling Falls. I guess, in a way, we did.

Instead of creating a beautiful life, though, instead of having a family and growing even more deeply in love, we became entangled in a world of evil secrets. Contrary to the way time typically seems to slow down in boring or unpleasant situations, the years there went by so quickly that now when I look back on them they’re a hazy blur that take up no more space in my memory than my first real job or some long-lost week spent at a beach when I was in my twenties. Of course, if I try, I can bring back details. Plenty of details. My memory is true, even if the town and people and my chaste, pleasant diary entries from that time are false.

Holly Tierney-Bedord is the author of over twenty books in a variety of genres including Kindle Unlimited All-Star winner Sweet Hollow Women. She lives in Madison, Wisconsin.