The Fate of the Tala 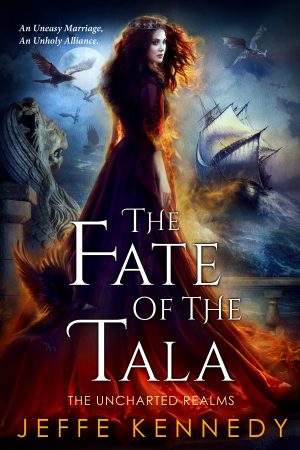 “Andromeda,” a sweet voice crooned. “At last we meet.”

The lovely, lethal face of the High Priestess filled my vision, overwhelmingly large. We occupied a nebulous place, not anywhere physical, but an ethereal realm of her making. She’d caught me by surprise and jerked my consciousness into it, and now attempted to frighten me with tricks of perspective.

Oh, I don’t think so. I wouldn’t be her prey. I was the Queen of the Tala, and a sorceress to be reckoned with. I wrested free of her grip and took control of my side of the ethereal realm. She frowned as I pulled back my perspective enough to see her full form, until we seemed to be two women of equivalent size facing each other in a cloudless space.

The High Priestess appeared as she had in physical form. I’d seen her before through the eyes of many of my friends—including in Ursula’s memories from when the High Priestess nearly killed her—but never with my own. Petite, slim, blond, she was very much a classic Dasnarian beauty, except for her matte black gaze. Illyria, the priestess who’d wreaked such havoc at Ordnung, had eyes like that. The mark of Deyrr. I’d grown considerably in my abilities since that brief glimpse of Illyria before Ursula killed her, so now I recognized the numinous quality to their lightless depths.

The presence of the god showed in those unsettling eyes. Not pits at all, but the physical expression of Deyrr, the god of corruption, starvation, and immortality through the loss of life. As Karyn had guessed, the High Priestess had indeed been born a long time ago, but her body had died before her twenty-fifth birthday. Deyrr animated her, keeping her preserved like a doll made of wax.

“Nothing to say to me, Andromeda?” the High Priestess purred, pouting prettily. “Or should I call you Andi? I understand everyone does. I’ve been so looking forward to meeting you. A conversation between colleagues, if you will. I wish I could say between peers, but you and I both know you can’t come close to my level of power and expertise. I hope you won’t allow your understandable jealousy to come between us.”

“And you are?” I asked blandly.

She giggled, wagging a finger at me. “Don’t pretend you don’t know perfectly well who I am, Salena’s daughter. I knew your mother, by the by. Dreary person. Depressed and crazy. A waste of all that delightful talent. I certainly hope you don’t take after her.”

When you’re a manifestation of your own consciousness, lying—or hiding reactions—becomes terrifically more difficult. Still, I managed. I raised an eyebrow at her. “I meant your name.”

“You can call me High Priestess.”

The tales tell of three sisters, daughters of the high king. The eldest, a valiant warrior-woman, conquered her inner demons to become the high queen. The youngest, and most beautiful outlived her Prince Charming and found a strength beyond surface loveliness.

And the other one, Andi? The introverted, awkward middle princess is now the Sorceress Queen, Andromeda—and she stands at the precipice of a devastating war.

As the undead powers of Deyrr gather their forces, their High Priestess focuses on Andi, undermining her at every turn. At the magical barrier that protects the Thirteen Kingdoms from annihilation, the massive Dasnarian navy assembles, ready to pounce the moment Andi’s strength fails. And, though her sisters and friends gather around her, Andi finds that her husband, Rayfe, plagued with fears over her pregnancy, has withdrawn, growing ever more distant.

Fighting battles on too many fronts, Andi can’t afford to weaken, as she’s all that stands between all that’s good in the world and purest evil.

For Andi, the time to grow into her true power has come. . .

Pre-order your digital copy here:
https://jeffekennedy.com/the-fate-of-the-tala
print copies will be available after release.

Her award-winning fantasy romance trilogy The Twelve Kingdoms hit the shelves starting in May 2014. Book 1, The Mark of the Tala, received a starred Library Journal review and was nominated for the RT Book of the Year while the sequel, The Tears of the Rose received a Top Pick Gold and was nominated for the RT Reviewers’ Choice Best Fantasy Romance of 2014. The third book, The Talon of the Hawk, won the RT Reviewers’ Choice Best Fantasy Romance of 2015. Two more books followed in this world, beginning the spin-off series The Uncharted Realms. Book one in that series, The Pages of the Mind, was nominated for the RT Reviewer’s Choice Best Fantasy Romance of 2016 and won RWA’s 2017 RITA Award. The second book, The Edge of the Blade, released December 27, 2016, and was a PRISM finalist, along with The Pages of the Mind. The next in the series, The Shift of the Tide and The Arrows of the Heart came out in August, 2017, and October, 2018. A high fantasy trilogy, The Chronicles of Dasnaria, taking place in The Twelve Kingdoms world began releasing from Rebel Base books in 2018. The novella, The Dragons of Summer, first appearing in the Seasons of Sorcery anthology, finaled for the 2019 RITA Award.

In September 2019, St. Martins Press released The Orchid Throne, the first book in a new romantic fantasy series, The Forgotten Empires. The sequel, The Fiery Crown, will follow in May 2021.