The Will to Die 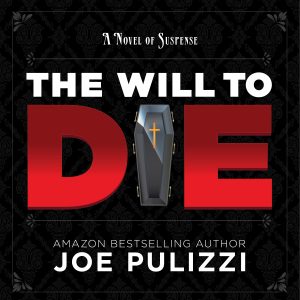 I sank back into the booth.

“Nothing brightens your day like seeing your father commit suicide.” I thought I was going to be sick.

“Are you sure he did?” Robby asked. “It could have been sweetener or something and he coincidentally had a heart attack or stroke.”

“Listen,” Robby said. “If that’s true, there’s a reason behind this. He wouldn’t kill himself unless there was something terrible going on.”

“That doesn’t make me feel better,” I said.

“Robby’s right,” Sam said. “He set the camera up two weeks ago, so he’s probably giving us fourteen days of clues or information to work with.”

“It’s more than that,” Robby said. “For whatever reason, your dad needed you to know, without a doubt, that he killed himself. By doing that, we already have some important information.”

“Robby, you’re brilliant,” Sam said. “You know how we’ve been questioning McGinty’s work as coroner? He did a full autopsy and came back saying the COD was a heart attack. Now we know that the coroner, and whoever else is working with McGinty, didn’t want anyone to know that your father died by poison or whatever that was he put in his coffee.”

“Good point,” I said. “But why couldn’t he just tell me. Or write something down. Why be so cryptic? It doesn’t make any sense.”

“Spock from Star Trek. I can’t remember which movie it was, but he said something like once you eliminate the impossible, whatever is left, no matter how improbable, must be true.”

Robby looked at Sam. “Whatever, whoever, doesn’t matter. The point is that it’s impossible Abe just killed himself on video for dramatic effect. He did it for a reason. If that’s true, he couldn’t write all this down or tell you in person. He had to communicate this way. He was being watched.”

“And Will you said that you couldn’t find the last few months of Abe’s diary installments,” Sam said. “Either he stopped voluntarily because someone was watching him or someone took them or he hid them somewhere for you to find.”

“Okay.” I paused, trying to collect myself. “Let’s say you’re both right. What’s next?”

“Well, first,” Sam said, “we need to go through the rest of this video footage and see what’s there. And then we need to get those additional blood samples to my contact at the Clinic and see what we can find.”

Sam had a good point. There’s no way my father would have gone through the extra work of keeping those samples unless he was planning on using them for something.

“Robby and I have a meeting in Cleveland first thing Monday. I can take them to your contact at the Clinic. It’s right next to the PopC offices. If someone is tracking our movements, we’ll be able to get them there without leaving a bread trail.”

“But we’ve got bigger issues,” Robby said. “Like the fact we’re all being tracked right now. We need to assume that our phones are bugged, our cars have tracking devices on them. It’s also likely that our houses are under surveillance. Will, I bet your dad’s house is completely wired up.”

“Okay,” I said. “But we need to act in a way that shows we don’t know we’re being tracked. We use our phones for normal stuff. We use our cars as usual. Robby, do you still have that crate of phones from the LG marketing pitch we did?”

“Good. Get three of those. We can communicate with each other while we figure this out. Sam, I’ll come back from Cleveland after our Monday meetings and get one of the phones to you. Robby can program each of our numbers in to make it easy.”

“What do we do until Monday?” Sam asked.

“You got a better idea?”

“No,” Robby said. “Sounds right. But what about calling in the po-po?”

“I’m guessing the Sandusky Alliance owns the police. They all play Friday poker together or something,” Sam said.

“Agreed,” I said. “Probably not safe. But I don’t think we have enough evidence to contact my old roommate that works for the Cleveland FBI. He would be our first contact when we have something.”

“You keep working on any trends you saw at the funeral home with the body count. Perhaps Dad was taking samples strategically and that will tell us something. Can you do that without being noticed?”

“I think so,” she said. “I already have your dad’s spreadsheets from the last few years, so I’ll start there. As for the samples, I’ll get those ready tomorrow, and I’ll do it in a way no one would notice, even if there’s a camera in the embalming room that I’m not aware of.”

“Can you imagine the sick freak watching those videos if there is a camera in there?” Robby said with a straight face. “What can I do?”

“You should stop in and visit your insurance uncle in Elyria.”

“What are you going to do?” Sam asked.

“I’ll find a place to watch the rest of these videos,” I said. “And I have a meeting with Xena tonight. I’d like to find out more about the Sandusky Alliance, and I have a feeling she knows something.”

Here is an audio snippet taken from Chapter 35. See below for a special free download of the audiobook!

The story of death in a small town, the lies that covered them up, and a conspiracy that brought one man to his knees…

Will Pollitt just successfully delivered the business pitch of his life — a win he desperately needs. At the same moment 50 miles away, Will’s father is found dead.

Coming home gives Will a chance to reconnect with his father’s life and work. Yet digging into the past, Will makes a shocking discovery: His hometown neighbors are turning up dead at alarming rates. His father seems not only involved but could he be… one of the lead operatives? Is that why his father is now dead, too?

The hunt for the truth jeopardizes Will and everything he loves. And it makes him question not just his father’s death, but what it means to truly live.

https://thewilltodie.com/wtd3 (currently, the book is available for free as an audiobook to TWITA readers).