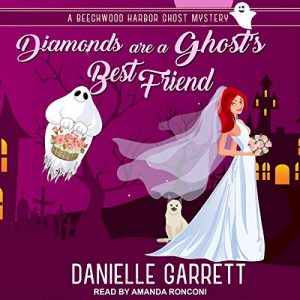 Diamonds are a Ghost’s Best Friend starts some time after the conclusion of the fourth book, Big Ghosts Don’t Cry. Lucas and Scarlet are engaged and planning their future life together. However, when they discover a ghost haunting the chapel in which they want to marry, Scarlet strikes a deal with the ghost to help her discover who murdered her on her wedding day.

Diamonds are a Ghost’s Best Friend feels more like the earlier books in the series, in that the recent revelations of demons and Scarlet’s newly acquired powers are only a passing mention. She solves the case much like she used to do, with the help of the departed, both the victim and those she considers her friends. I like how Scarlet uses caution and smarts to piece together the puzzle. Additionally, Lucas is a strong and permanent presence in her life, working with Scarlet rather than against her. I really have enjoyed watching their relationship blossom into the point of marriage; it’s evolving along side Scarlet, making the story richer.

Running parallel with the murder mystery is the fact that Scarlet plans to leave Beechwood Harbor for Seattle where she and Lucas will live after they are married. This brings up hurt feelings and unsettling issues with her ghostly gang. It’s something that flows in and out of the background of the book until nearly the end when Scarlet finally discusses all the pending changes with her crew. The way it’s handled and the final outcome of the book has me thinking this may be the final Beechwood Harbor Ghost Mystery, but I wasn’t able to find any confirmation of this on the author’s website.

The Beechwood Harbor Ghost Mysteries has been an enjoyable series, and I strongly urge listeners to start at the beginning of the series rather than jump in here. I hope for more adventures for Scarlet, Lucas, and the gang, but if not, I’m happy with how this one ends.

Going to the chapel and we’re gonna get … haunted?

I’ve got a ring on my finger and a date circled on the calendar, let the wedding planning begin!

As luck would have it, the little wooded chapel I’ve got my heart set on, is plagued by the not-so-nice spirit of a former bride. She died on what was meant to be her wedding day and isn’t going to step aside to let anyone else take her place at the altar. She claims the chapel is cursed and points to her own murder as a sure sign, but I’m not convinced.

I’ll have to keep my new reaper powers in check and solve this case the old-fashioned way if Lucas and I have any shot at starting our happily ever after underneath the majestic pines.