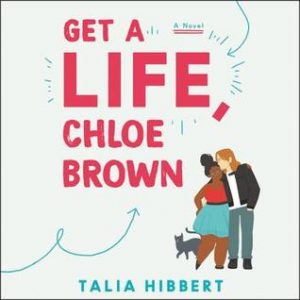 Chloe Brown comes from a wealthy family, is cared for and given what she needs. She has her own business and makes her way in the world, but due to her chronic illness and near constant pain, she keeps herself isolated. After a near death experience, Chloe decides she needs to “get a life”. She does this by creating a list and moving out on her own. Now if only her handsome super, Red, would keep his distance, Chloe would be good.

Red doesn’t like Chloe because she’s pretty and a rich snob, just like the ex who crushed his soul. However, after he finds Chloe in a tree trying to rescue a cat, the pair start an uneasy acquaintance which leads to an agreement where Red will help Chloe with her list. As the pair spends more and more time together, sparks fly and emotions go haywire, and that’s when Chloe Brown truly gets a life.

There is so much I absolutely love about this story that I find it hard to put it all into words. Get a Life, Chloe Brown is an amazing romance; slow and thoughtful, but bursting with emotions. At the center of the book are the individual stories of both Chloe and Red growing into the persons each wants to be. Both have serious emotional issues due to mistreatment of past friends and lovers, which keeps each closed off from what makes them whole. Cocooning and twisting around the individual character development is their unhurried and steadily developing friendship and love. As Red and Chloe give into their mutual attraction. As Chloe speaks up for herself. As Red understands without pity the pain Chloe experiences. As both listen to the other and learn acceptance and apology. Toss in several laughs and hard tears, and all together, this makes for wonderful and perfect storytelling. Chloe and Red’s story is not easy, but it’s mature and amazing.

Narration: A HUGE part of why I enjoyed Get a Life, Chloe Brown so much is the narrator. I love Ms. Andoh’s voice and how she brings Chloe and Red to full life. The story is shared in the alternating third-person POV’s of Red and Chloe. She uses a “neutral” female narrator for both POVs, altering the dialogue based on the character. I am not an expert on accents, but Ms. Andoh hits the nail on the head for me. She is able to make the necessary adjustments to her underlying British accent, both slight and considerable, to match the socio-economic backgrounds of the different characters. She also infuses her performance with emotion, bringing to life Chloe, Red, and those around them. Her performance is utterly marvelous.

In the end, I can’t say enough about how much I enjoyed listening to Get a Life, Chloe Brown. It is the first book in years to touch me so deeply, creating the need for ugly crying and lifting me in sublime joy. It’s a book that touched my heart and soul and will leave its mark for years to come.

My Ratings:
Story: A+
Narration: A

In addition, Get a Life Chloe Brown is one of…

Chloe Brown is a chronically ill computer geek with a goal, a plan, and a list. After almost—but not quite—dying, she’s determined to spice up her life and finally fit in with her glamorous family. Her “Get a Life” list has six directives, and she’s already completed the first: finally moving out of her family’s mansion. The next items?

Enjoy a drunken night out.

Have meaningless but thoroughly enjoyable sex.

Travel the world with nothing but hand luggage.

And… do something bad.

But it’s not easy being bad, even when you’ve written step-by-step guidelines on how to do it correctly. What Chloe needs is a teacher, and she knows just the man for the job.

Redford ‘Red’ Morgan is a handyman with tattoos, a motorcycle, and more sex appeal than ten-thousand Hollywood heartthrobs. He’s also an artist who paints at night and hides his work in the light of day, which Chloe knows because she spies on him occasionally. Just the teeniest, tiniest bit.

But when she enlists Red in her mission to rebel, she learns things about him that no spy session could teach her. Like why he clearly resents Chloe’s wealthy background. And why he never shows his art to anyone. And what really lies beneath his rough exterior…