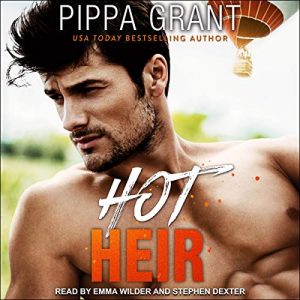 Viktor comes from a royal family that was ousted in the days of his grandfather. Living in a neighboring country, Viktor chose a life of service as one of the royal prince’s body guards. But when the current ruler of his home country dies, they look to Viktor, the eldest son, to step in as ruler. The only catch, he must be married.

Peach Maloney is struggling with life. She’s trying to adopt her much younger sister to keep her from repeating the same mistakes she and their mom made. However, after a huge hot-air balloon mishap, the misogynistic judge tells Peach she must be married before he’ll let her adopt Papaya.

Yep… this is a fake relationship story, one of my favorite tropes. And after devouring a few of Ms. Grants titles (all loosely related and in the same world), I couldn’t wait to try Hot Heir. Overall, I enjoyed the story, but it is not near the top of favorites for me.

While Hot Heir has Ms. Grant’s hallmark humor, the story doesn’t have the same lightness found in the stories I’ve listened before this one. It’s missing the fun humor, although Fred the Alpaca and a few other scenes did make me giggle. Both main characters are in serious situations and they really don’t like each other, so they go it alone even once they are married. Peach has her hands full with her sister and the pressure of trying to do it all. Viktor is king of a divided and crumbling, backwards nation. It isn’t until about two-thirds into the story that the pair finally start to connect and work together. This is about the time I started getting into it more. Additionally, I struggled with Viktor. The combination of the narration and the way his dialogue is penned, he sounds like a stuffy older man rather than a hot young heir.

Narration: The narration was a weaker point for me. The story is shared via first person POV, alternating between Peach and Viktor. Both narrators alter dialogue based on speaking character’s gender, age, country of origin. Mr. Dexter uses an accent… sort of British, but I’m not an expert, to fit Viktor’s European upbringing. However, it made me think he was an older man (I kept seeing Héctor Elizondo as Joe from The Princess Diaries). While I struggled with his performance of Viktor, I did appreciate his voices for the American women including Peach’s slightly southern accent and Papaya’s 14 year old teen. Ms. Wilder uses a soft and slightly breathy voice, which I liked. Her slight southern accent for worked well for Peach. She did use a deeper accented voice for Viktor, which I liked slightly more than Mr. Dexter’s version.

In the end, Hot Heir is a good addition to the overall world, but not as much fun as the ones in the Girl Band series. I liked the underlying message that being strong is not in opposition to loving and trusting someone. I liked seeing Viktor and Peach find a connection, but I just didn’t connect with them as much as I hoped.

If I had to pick a bride of convenience, my first choice would NOT be Peach Maloney.

My fiftieth choice would NOT be Peach.

Top spot on my list of occupational hazards? Yes.

Royal pain in the crumpets? Yes.

A bride of convenience? No.

But I’ve unexpectedly gone from royal bodyguard to monarch, having inherited a crown that was stolen from my family long before my birth. The kicker of this unexpected royal gift? In order to take the throne I must find a wife.

Have I mentioned Peach would NOT have been my hundredth choice?

But I’ve no other options, and she needs a favor that my new position can fulfill quite nicely. So we’ve agreed to play the doting newlyweds out in public.

In private, though, our rules are simple:
No touching.
No talking.
And certainly no sex.

I should have known better than to marry a rule-breaker.